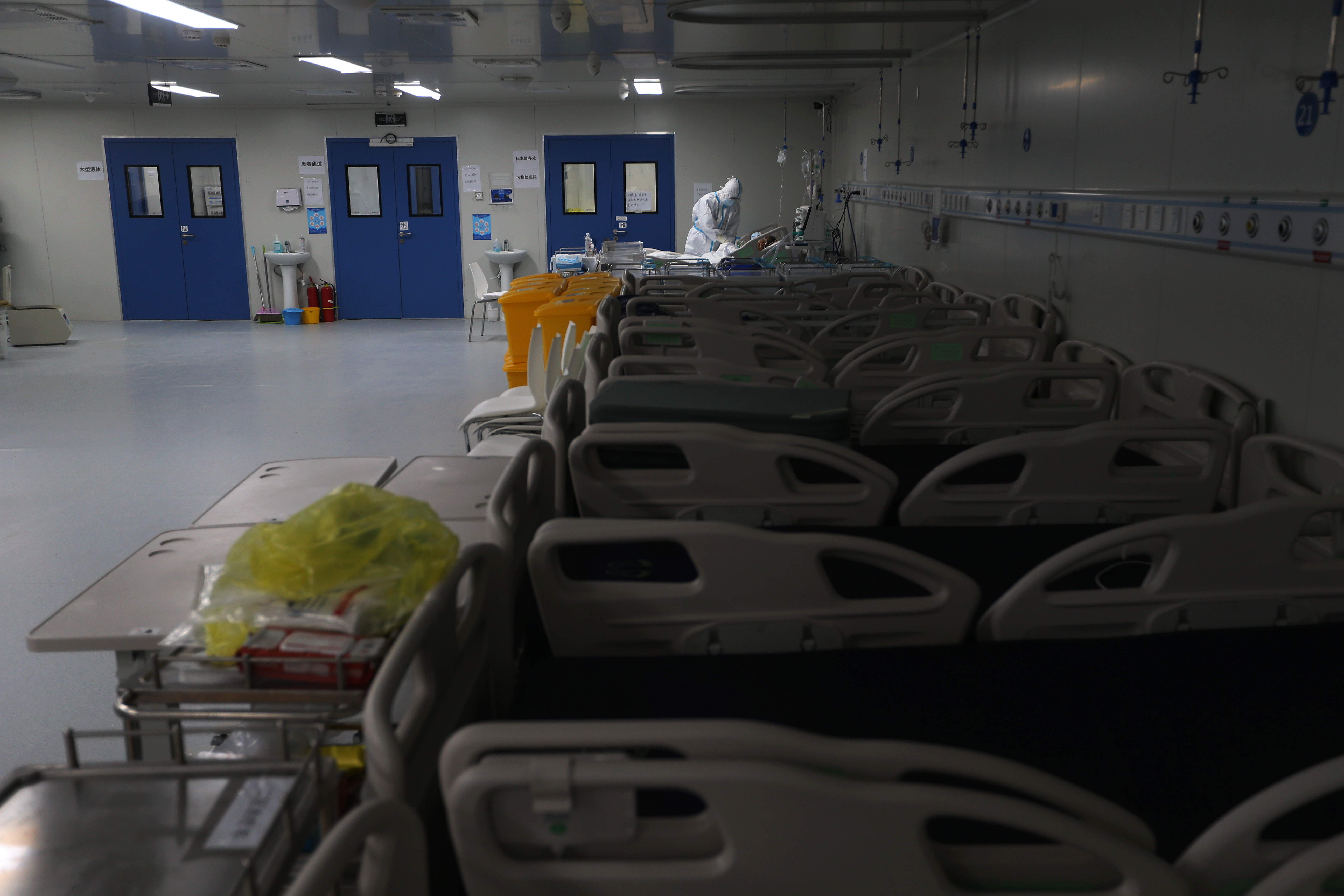 The night before Leishenshan Hospital of Wuhan closed with zero new patients on Wednesday, a doctor looks after a patient infected with the novel coronavirus and once in critical condition. Although their nucleic tests have turned negative, four patients were transferred to Zhongnan Hospital for treatment of other basic diseases. Photo: Cui Meng/GT

As the lockdown was lifted in Wuhan, a city in Hubei Province hit hardest by coronavirus in China and its funeral houses reopened to the public, foreign media, including the most rancorous about China's virus prevention efforts, believed they found treasures based on a picture circulated online showing a long line in front of those houses to form their own error-ridden estimation that the real death toll of Wuhan far exceeds what Chinese authorities have reported.

A GT reporter talked to family members of people who died of coronavirus; Wuhan volunteer groups who had access to the infection and fatality numbers in the city; community workers helping relatives collect urns; epidemiologists from China and the US who refuted those foreign media's baseless smearing of China's virus battle. This is the second part of a series featuring rebuttal of foreign media's distorted report of Wuhan following the first one which marks field investigation of China's "disputed wet markets."

Faced with foreign media's misrepresentation, volunteer groups presented data they gathered during three months' online and offline work; community workers and doctors cleared away the mist surrounding Wuhan's funeral houses; epidemiologists presented scientific proof which shows why there's no chance and no significance for China to conceal the real death toll data; and relatives of family members expressed deep gratitude for community workers' help, which was twisted by foreign media as "surveillance." A medic puts a seal on a door of the Leishenshan Hospital on Wednesday in Wuhan. The hospital was built within 10 days with 1,500 beds. It had received patients since February 8 and admitted 2,011 patients in all. Photo: cnsphoto
Real death toll

Some Western media, including VOA, Newsweek, and RFI, made groundless accusations on Wuhan's death toll, claiming it amounts to more than 40,000. They come up with the number solely based on a Caixin's report which quoted a driver as saying that his van carried more than 2,500 urns on a day after the funeral houses reopened to the public after the epidemic; and based on a picture showing long lines of Wuhan residents in front of funeral houses after they opened to the public after two months' closure.

Chen Xingxu, the founder of "Wuhan 520," a volunteer group founded in late January after the outbreak which is also responsible for gathering online help-seeking information of COVID-19 patients in Wuhan, said that until now, they have registered more than 2,000 patients who contracted with coronavirus.

According to data from Chen's organization, roughly 50 of those patients died afterward, making the death rate from the COVID-19 recorded by his organization 2.5 percent.

Official figures show 2,579 people in Wuhan died from the virus, bringing the city's mortality rate to around 5.1 percent.

"The number was generated by 200 of our volunteers' arduous work during the past three months. How could those foreign media just make up their estimation based on the reported number of urns, assumptions and social media? This isn't anything to go by," said Chen.

Cathy Li from "Life Support," another organization that was founded in February, similar to Chen's, also helped generate data of COVID-19 patients, told the Global Times on Wednesday that they have recorded few thousand infected patients in their system, and helped contact hospital for arranging beds for them.

"After callback on those patients on April 10, we found there were dozens, no more than 60 deaths," said Cathy.

A total of 47,900 people died in Wuhan in 2018, which means about 4,000 people died monthly on average, according to data from Wuhan's bureau of statistics.

After Wuhan was placed under lockdown since late January, the city's funeral houses were also closed to the public, and reopened on March 23.

During the outbreak, in addition to deaths caused by the virus, death figures in the city, with a population of roughly 11 million, included those who died for other reasons, said Chen, citing cancer patients who died after missing chemotherapy because hospital resources were greatly strained to treat COVID-19 patients.

Those deaths were not included in the COVID-19 death toll, but their bodies were also cremated during the two months, along with other deaths in Wuhan, "the long line in front of the funeral houses is not a surprise and should not be solid evidence of the a government cover-up regarding Wuhan's death toll," said an anonymous Wuhan doctor.

VOA made a groundless estimation that Wuhan funeral homes likely distributed an average of 3,500 urns per day from March 23 (the day Wuhan's funeral houses reopened to public) to April 4, which marks Qingming Festival, the traditional tomb-sweeping festival. By that estimate, VOA said 42,000 urns would have been released in a 12-day period.

This was refuted by Wuhan volunteer driver surnamed Fang, who was assigned to take relatives of the deceased to collect urns, as the city was still under strict lockdown and traffic was not resumed yet.

Fang said that he thought he would be preoccupied for quite a few days after Wuhan funeral houses reopened, as the community he was in charge of has several hundreds of residents, mostly senior residents, and there were only five volunteer cars.

But he finished this task within two days after March 23.

"There were long lines at funeral houses in the first two days. But later, the number drastically declined. Chinese people traditionally believe burial brings peace for the deceased. So those relatives flocked to collect remains right after funeral houses reopened in order to bury them to bring peace to their loved ones." Some Western media, like the New York Times and officials such as US National Security Adviser Robert O'Brien cast doubts on China's infection and total death number as it was low compared with countries where the virus is rife, such as Italy and the US, with the latter recording the largest number of COVID-19 patients worldwide.

Wuhan's status quo is the best evidence that China is not concealing the city's infection and death data, Yang Zhanqiu, a virologist at Wuhan University, told the Global Times.

Yang noted that since late March, it is almost clear from the fact that there were few cluster infections in Wuhan, and if death cases can be concealed in large numbers, it is impossible for China's epidemic to achieve today's results.

Leishenshan Hospital, built as a temporary facility for treating patients infected with novel coronavirus pneumonia in Wuhan was closed on Wednesday after the last group of patients were discharged.

The temporary hospital, built in less than two weeks in response to the public health emergency and having a capacity of 1,500 beds, has fulfilled its mission, according to the hospital's president, Wang Xinghuan, who is also the president of Zhongnan Hospital.

Since opening on February 8, the hospital admitted 2,011 patients infected with COVID-19, with serious cases accounting for about 45 percent, Wang said, adding that the hospital's overall mortality rate was about 2.3 percent.

A medical team from Peking Union Medical College Hospital left Wuhan on Wednesday. The team was the last medical team that left Wuhan after supporting the city when it was deeply engulfed by the coronavirus.

Huang Yanzhong, a senior fellow for global health at the Council on Foreign Relations of the US, told the Global Times the mortality rate in South Korea, about 1 percent, can also prove the authenticity of China's numbers because it is close to the death rate outside China's Hubei Province.

"From this point of view, the possibility for covering up confirmed cases is very slim," said Huang.

The Chinese government's efforts to screen COVID-19 patients are thorough and comprehensive. Except for Daegu in South Korea, no other country or region could compare with Wuhan in terms of screening, Huang said.

Huang told the Global Times that the whole country is aware of the severity of the epidemic, so it is pointless to cover up or play down the number of confirmed cases.

"In fact, the decision-makers want nothing more than the most accurate and real number, so they can make the right decision; otherwise they cannot handle the epidemic properly," said Huang. 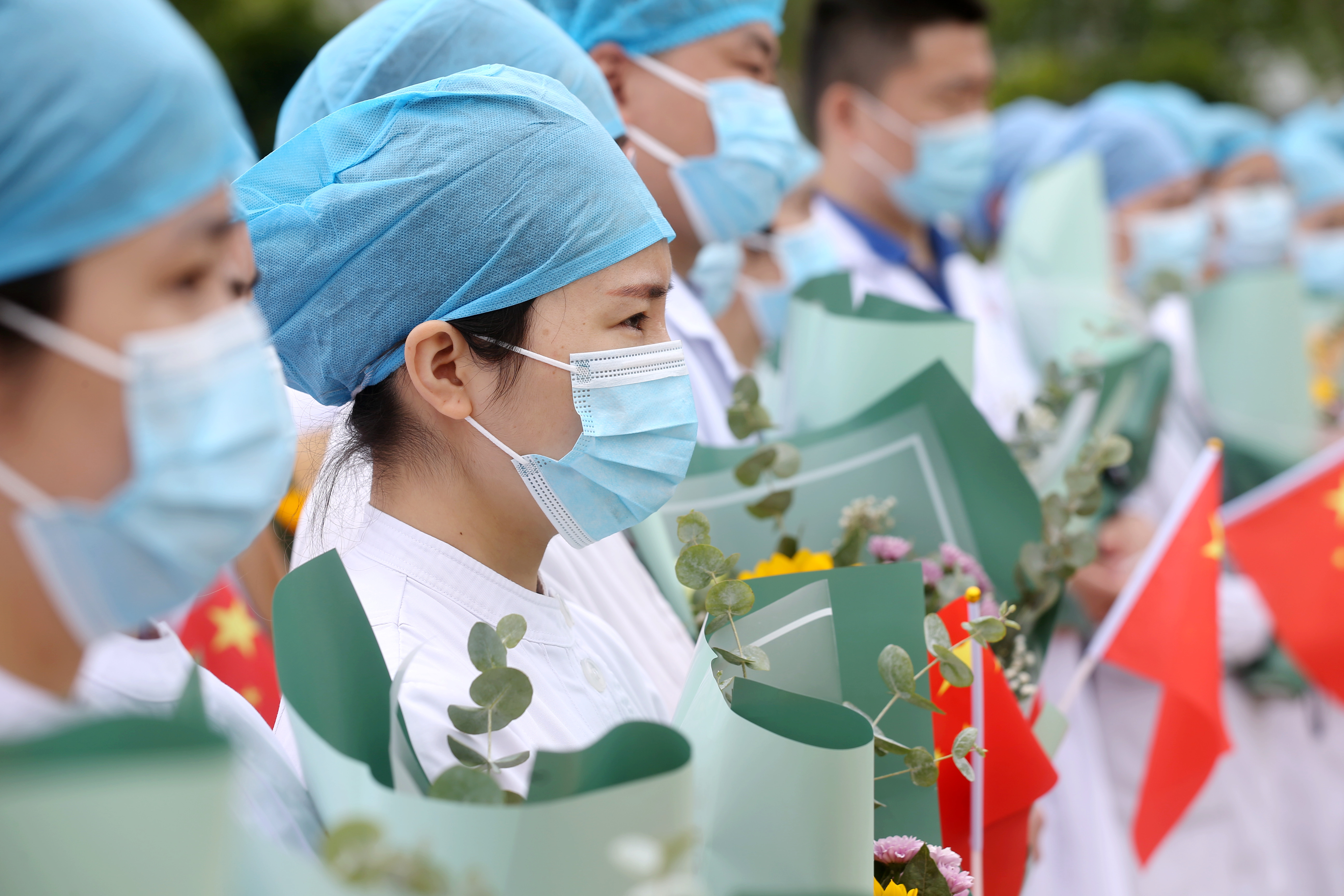 Aside from questioning the city's death toll, foreign media, including New York Times and VOA, began to throw mud on Wuhan community workers' accompanying relatives on their way to collect urns, demonizing their efforts as 'surveillance' of residents; to curb expressions of grief and attempt to control the narrative amid doubts about the government.

Wuhan resident surnamed Jiang, whose uncle died because of the virus in February, was among the first group of people to collect the urn on March 26. Jiang told the Global Times that the city's traffic was not yet resumed by that day, so her family members could not drive out.

"The community workers were greatly helpful. They helped us register at the funeral house and take the number for us," said Jiang, noting the community also arranged a volunteer car to send them to the mortuary house.

Zheng Li (pseudonym), a 29-year-old community worker from Wuhan's Wuchang district, told the Global Times on Wednesday for the first two days after the funeral houses reopened, she got up at 5 every morning to collect the numbers for relatives which allowed them to pick up the urn when it was their turn; then accompany them to collect the urn and bury their beloved ones.

"Apart from solving the paperwork and traffic inconveniences family members faced, we also shoulder the responsibility of soothing their grief. Isn't it nice to have some company for an old lady on her way to collect her husband's urn?" said Zheng.

She said most people who lost their relatives were quiet on the way, no cursing, no blaming, even no tears. "They just want to bury their deceased family members as soon as possible and bring them peace."

Zheng said almost 90 percent of community workers here are women. "How could women be able to monitor saddened relatives if the relatives were embittered and went out of control? If the government wants surveillance, why don't they dispatch policemen instead?"

"It is sad enough those people lost their closest family members during the epidemic; it is even sadder that their tragedy has fallen into the source of a rumpus of those heartless foreign media," Zheng signed.