Electronic screens on several buildings in Wuhan, Central China's Hubei Province show local residents' gratitude to people across the nation, the army and those overseas for their help during the past three months in fighting the health crisis. On one building, it says "a heroic city." Photo: Cui Meng/GT

Wuhan, the Central China city which bore the brunt of the novel coronavirus outbreak, lifted its 76-day lockdown on April 8 and gradually returned to normalcy. Ever since the first infection was reported in the city, Wuhan has been demonized by some foreign media outlets, such as the New York Times, Deutsche Welle and Wall Street Journal, as a harrowing city where families were fragmented by deaths; where residents were traumatized by the lockdown and tragedies abounded; where ordinary people were disappointed in the local governments' handling of virus prevention, and were allegedly engulfed by anti-government resentment.

The COVID-19 epidemic will surely leave a scar which probably will never be erased from Wuhan, but the city's residents, with naturally born stubbornness and optimism, are ready to leave behind those dark days and embrace new lives. Some of them have foregone their previous complaints of medical workers after they stepped into ICU rooms for the first time and felt the smell of death; some of them lost their family members, but still bearing with gratitude for the assistance that warmed them during the darkest days; some of them were willing to place themselves in life-death situations to save others, and to make life easier for other quarantined people.

Faced with Western media's description of Wuhan as a city undercut by fear, anger, and desperation, people from Wuhan, a city praised by China's top respiratory expert Zhong Nanshan as "heroic," decided to come out and tell their stories. This is the third part of a series of rebuttal of foreign media's distorted report of Wuhan following an investigation into Wuhan's death toll and "disputed" wet markets. 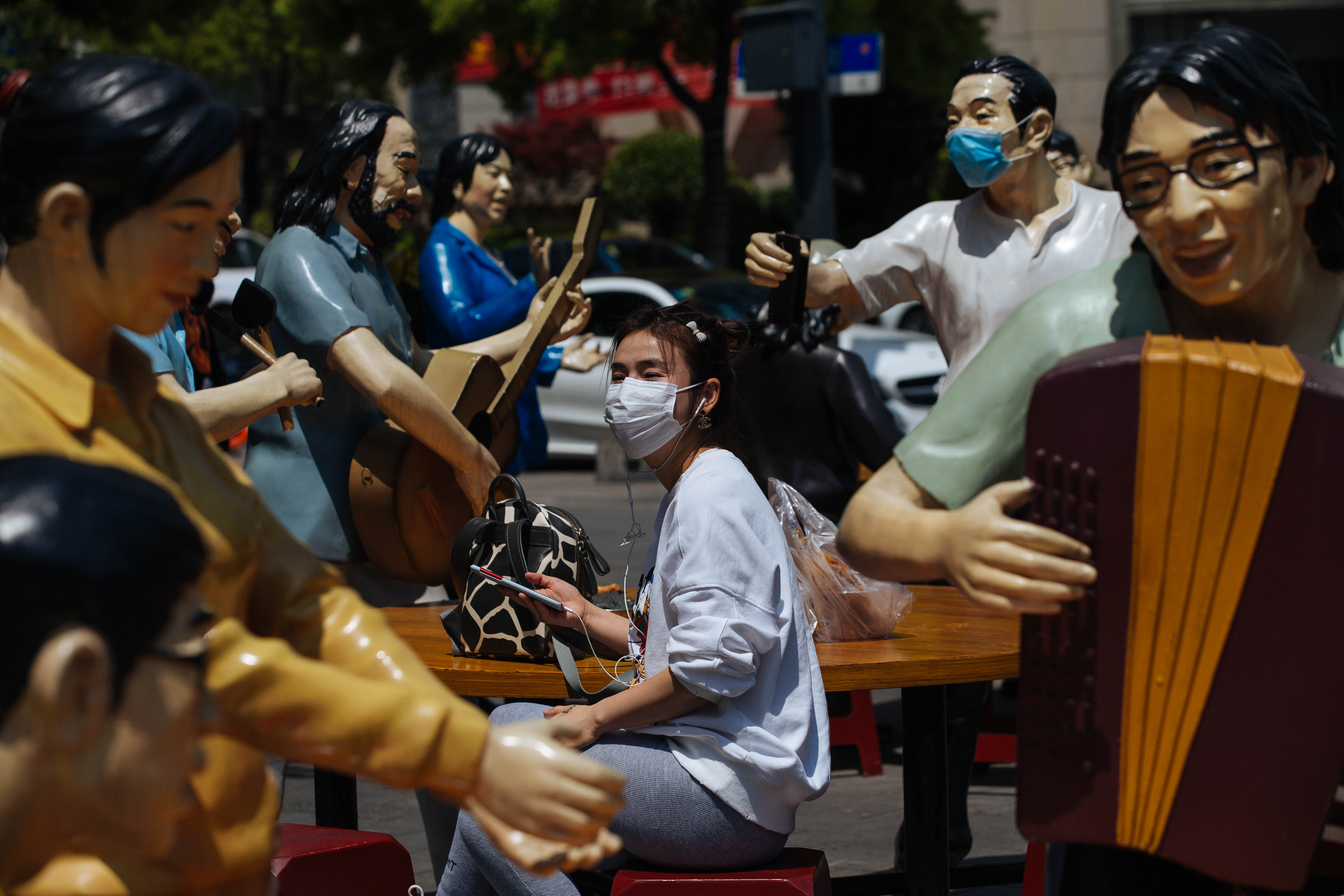 Wuhan residents have a light moment on Thursday. Photo: Li Hao/GT
From darkness to brightness

That people died or were denied easy and quick access to treatment in Wuhan at the preliminary stage due to hospitals' shortage of beds and basic supplies has become an easy target of Western media outlets like the New York Times, as China's "inhumane treatment" of its patients.

Chen Xingxu, founder of a Wuhan-based volunteer group focusing on providing help for coronavirus patients in the city, sympathizes with those media's tone at the early stage, when he escorted a couple, both contracted with the virus, with the husband in critical condition, to the busiest Wuhan Union Hospital in early February.

"The hospital was thickly dotted with mask-clad patients standing in the hall, not even a needle could be plugged in... The husband, with more and more labored breath, could barely rose to his feet. After five hours of struggling and tormenting, he fell and died in front of his wife," Chen said.

It was at this moment that his anger was aimed at medical staff. "How could you possibly ignore a dying patient, and tolerate him dying at your hospital's doorsteps?"

Chen's bigoted view soon changed after he shipped medical supplies to an ICU room of a Wuhan hospital. "The area was cordoned off. My legs felt like lead when I first stepped across the cordon; every step I moved, I felt death was following me with his uplifting sickle to seek my life. But I just stayed a few minutes there; those doctors and nurses, they had to stay there for months busying to save lives."

A pneumology doctor surnamed Peng, who declined to give his full name, from a Wuhan hospital said the last three months were "too heavy for me to think of. I don't want to, I dare not to."

Peng said he and his colleagues had to stay in ICU rooms for an average of eight hours a day, some even longer, when the ICU rooms were overwhelmed by critical patients. "Many of the patients here could not even breath smoothly, they could not speak; but their eyes were filled with imploration, with fear."

He said he was wearing a paper diaper all the time when working in the ICU room.

"Never thought a 40-something man would wear diapers at this age. But at that time, there was no time to think of those trivialities. It became a light moment for us all," he noted.

Wang Hui, deputy head of Wuchang district health commission, told the Global Times that she received an order from the upper-level government to open all district hospital wards to coronavirus patients on January 20. "Impossible" was the answer she got from the doctors and officials she consulted with. "They said they have not prepared, not at all."

But after Wang checked the examination results of 20 patients, which showed some patients' lungs had stripe-shaped shadows and the lungs of some patients even turned completely white, she became determined. "That was when I told others, 'No excuse, we must open all hospital wards to those patients.'"

Wang said later the government decided to adopt the policy of "rounding up all who needed to be rounded up and categorizing treatment for different types of patients," which has greatly improved the hospitals' treatment and conditions. "It also spared many people's lives," she said.

Wang said the Wuhan government also asked medical workers to distribute medicine for recovered patients, which helped them heal their damaged lungs, and followed up on discharged patients.

"Once, a patient called to tell me that he had recovered. But his voice was tinted with labored breath, which worried me and I asked, 'Why do you breathe so heavily?' He answered: 'I am happy; I breathe heavily whenever I am happy."

Accusing the Wuhan government of covering up information and earlier missteps of handling the crisis is also prevalent in Western media, such as BBC.

In mid-February, the Communist Party of China Central Committee appointed a new provincial CPC secretary for Hubei Province and a new city CPC secretary for Wuhan. After taking office, Wang Zhonglin, the newly appointed Wuhan Party chief, stressed on many occasions to "round up those needed to be rounded up, and no delay will be tolerated," and decided to differentiate the treatment for different types of coronavirus patients.

"After Wang came to Wuhan, for the first time [after the outbreak] someone knocked on our doors one by one to test our temperature," Peng said, noting for many doctors, Wuhan began to walk out of the dark after the government made detailed treatment and quarantine plans for patients and city residents.

Peng said for most Wuhan people, the policies changed too quick since the lockdown was imposed. "But those swift policy adjustments made Wuhan come out of the dark quickly. We see this only when comparing to Italy and the US, which responded slowly, giving rise to the surging number of infections." Employees at the Hanzheng Street in Wuhan, Hubei Province scan the QR health codes of buyers on Thursday. Nearly 70 percent of shopping malls on the street have reopened. It is a daily shopping place for locals and a wholesale center for commodities in Central China. Photo: Xinhua
A heroic city

Recently, many Western media like the New York Times and Deutsche Welle, which had been critical of China's virus battle, claimed to have dug out another treasure after they found a daily chronicle of Fang Fang, who "recorded" Wuhan residents' lives under the lockdown, was to be published in the US and Germany.

Media outlets such as BBC also cited the stories of Wuhan woman Li Lina, who struck a gong on her balcony, crying for a bed for her mother in critical condition; the death of a Wuhan film director's four family members, who were denied access to treatment because hospital beds was strained, to describe Wuhan's "desperation."

Li told the Beijing News that people should not label her as "tragic" just because of her action. "We suffered difficulties at the early stage. But help was pouring in afterward. My mother's recovery could not be attributed to me alone."

Thirteen-year-old Jiang Xiao (pseudonym) lost her grandfather and mother to the virus; and their death also affected her grandmother. Jiang soon lost all legal guardians because her father disappeared years ago after divorcing her mother.

Jiang's aunt, who requested anonymity, said that because of financial dilemma, she (the aunt) tried to reach out to more people for help by posting help-seeking information on China's Twitter-like platform Sina Weibo.

"Within days I received more than 30,000 yuan ($4,470) from netizens all over the country... After discussing with other family members, we decided it would be best to reject the donations, and seek help from a charity," Jiang's aunt told the Global Times.

"We've been bothering many people - volunteers, community workers and strangers - since the virus struck my family members. But we could only pay back with a grateful heart. Now, the deceased are resting in peace. We must carry on," she said.

When Wuhan people were urged to stay indoors to avoid further contagion, they faced great difficulty buying daily necessities and food, which propelled Zhang Zheyan to go out more often.

Zhang, a manager of a Wuchang district market ordered to be closed after the epidemic broke out in late January, shouldered the responsibility of delivering food to more than 500 households during the lockdown.

"I slept only two hours every day as I had to collect vegetables from the surrounding villages and send them to families who could not go out," Zhang said. When the task became too heavy for Zhang, he encouraged his son and daughter to help.

"Who isn't afraid of the virus? But someone has to solve the difficulties caused by the pandemic. If everyone thinks only of himself, everyone just stays home and does nothing, we might not be killed by the virus; we would starve first."

After the virus was first reported in Wuhan, many foreign media, include CNN and Reuters, reported that "Wuhan is the unwanted face of China's coronavirus outbreak," indicating Wuhan residents were discriminated all over China.

Chen Xingxu said he once escorted Yan Yiwei, a one-month-old newborn who had contracted the virus, to Nanjing for treatment in early February when Wuhan was still under a strict lockdown.

Chen said they drove passed a checkpoint in nearby Anhui Province. The inspectors, who were leisurely talking and smoking by the road, suddenly stood up when Chen's car, with a Wuhan license plate, approached.

The inspectors shouted at Chen, "Keep your window ajar!" when he lowered the car window and tried to explain the situation. After hearing Chen's explanation, the inspectors let the car pass. "I heard them shouting 'Wuhan Jiayou [add oil, Wuhan]' behind me when I drove away," Chen said. The night when Wuhan finally lifted its 76-day lockdown, Chen gazed at Wuhan's dark sky, which was illuminated by a light show of celebration, and joined the countdown of the bell tower to greet the historic moment. "I laughed until tears filled my eyes. It was the moment I finally realized why Dr Zhong Nanshan said Wuhan is a heroic city."