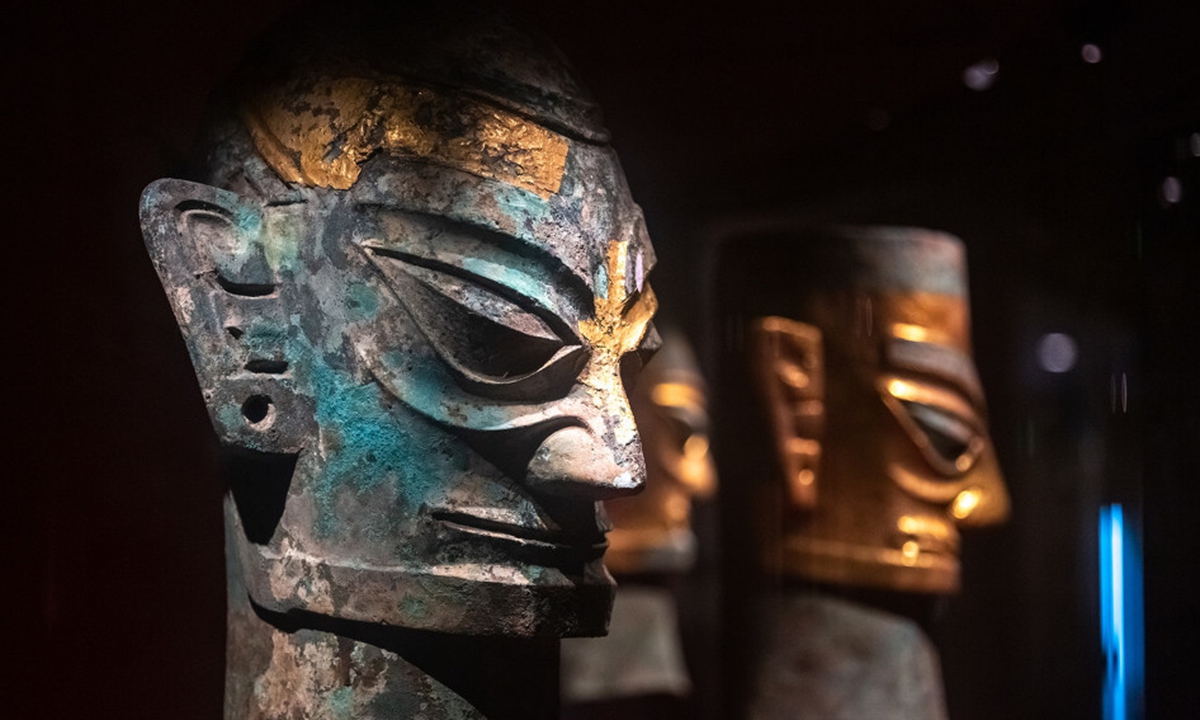 "After sleeping for 3,000 years, their awakening has shocked the world." Hundreds of cultural relics dating back to more than 3,000 years ago have been newly excavated from the Sanxingdui Ruins in Southwest China's Sichuan Province, stunning archaeologists and history buffs in China as well as the rest of the world.

First discovered in 1929, the Sanxingdui Ruins have been the source of one pleasant surprise after another following decades of digging and archaeological research.

Unearthed cultural relics such as a mysterious bronze mask, a more than 2-meter-tall bronze statuette and one of the most recent discoveries, a mask made of gold, are windows giving modern people a peak into the ancient cultures that existed in the upper reaches of the Yangtze River during the pre-Qin period (before 221 BC). If they could speak, what would they say after passing through three millennia to reach us?

In the history of Chinese archaeology, some mishaps occurred while technology was undeveloped, but now Chinese archaeologists have been armed with advanced equipment that has allowed them to carry out research more effectively and better preserve these unearthed cultural treasures.

And now through museums and other means such as pop music, they are coming to life once again.

Get to know us 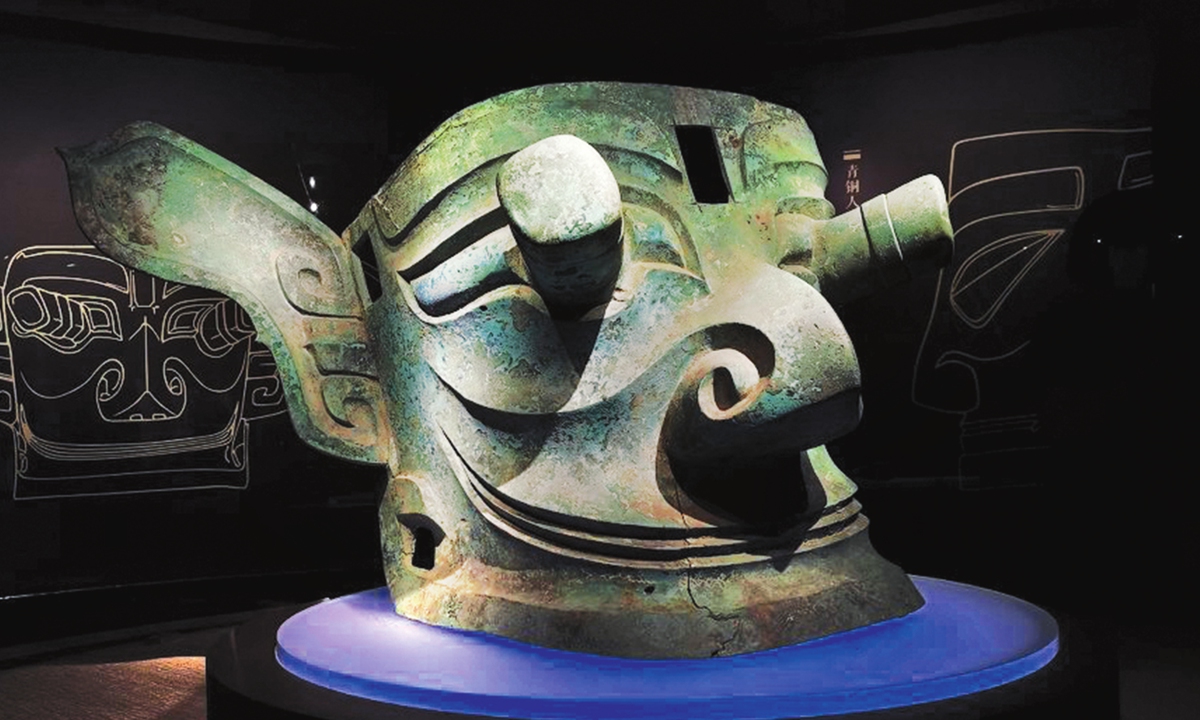 I have big ears, bulging eyes and a big mouth with a grin that stretches to the base of my ears, but I am not an alien! I might look very different from other Chinese bronze relics, but that's because I am from the ancient kingdom of Shu, which was once located in Southwest China's Sichuan Province thousands of years ago.

A heft 138 centimeters wide and 66 centimeters high, I was excavated from the second pit at the Sanxingdui Ruins site. Many Chinese netizens think I am very mysterious because there is little known about my origins. Some archaeologists think I am a depiction of Cancong, the semi-legendary first king of Shu and others think I am closely related to a mythical god dragon that also has a pair of bulging eyes. Meanwhile, there is a square hole in the center of my forehead, which many professionals suspect was used to hold an exquisite frontlet.

Indeed, there are still many unsolved mysteries surrounding me, but I am very proud to be one of the most distinctive and spiritual cultural relics discoverd at the Sanxingdui Ruins as well as the earliest and largest unearthed mask in Chinese history. 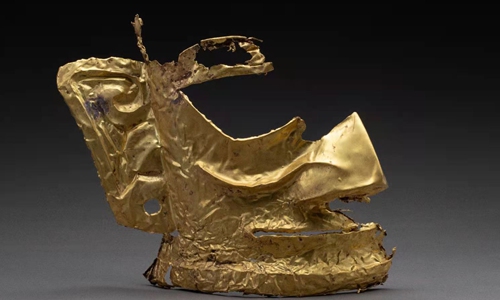 I am so flattered to become a cyber celebrity so quickly after archaeologists revealed me over the weekend. Although I am currently incomplete, I think I am still quite fashionable with my fancy ears and cool brow ridge. I quite like the interesting Photoshops that Chinese netizens have made showing me being worn by Captain America, Jake Sully in Avatar or the Phantom in The Phantom of the Opera.

They tell me I am priceless because I am made from 300 grams of valuable gold and archaeologists estimate that a complete version me of me may have weighed 500 grams. If that estimate is correct, that would make me the heaviest gold mask of my time period discovered in China.

Some experts say my appearance shows that the people of the ancient Shu civilization worshiped gold. Well, that might be true, but I still have secrets that need to be uncovered. For example, some archaeologists have noticed I look very similar to a golden mask found at the Jinsha excavation site in Sichuan Province, which raises a lot of questions about the relationship between the Sanxingdui and Jinsha civilizations. 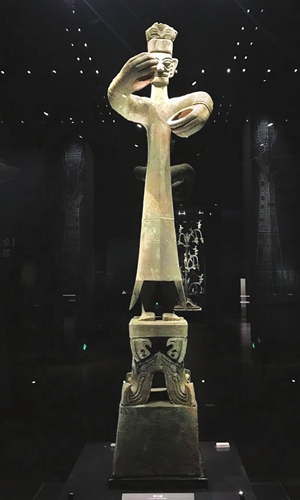 I wear a tall crown and a long robe with exquisite embossed dragon patterns and stand on a square-shaped base carved with the pattern of a beast. With the base, I am 262 centimeters tall, the world's oldest life-sized standing human figure. My arms are slightly bent at the chest as if I once was holding some holy object.

Many people think I look very serious and might be an image of the king of the ancient kingdom of Shu, while others believe I have the dual role of a high priest who presided over religious rituals and a symbol of the gods themselves. Despite my demeanor, I can be very easy-going, which people can see from the 3D posters showing me dancing.

I hope people can continue researching this period of history and fill in the gaps of what we know about the Shu Kingdom. 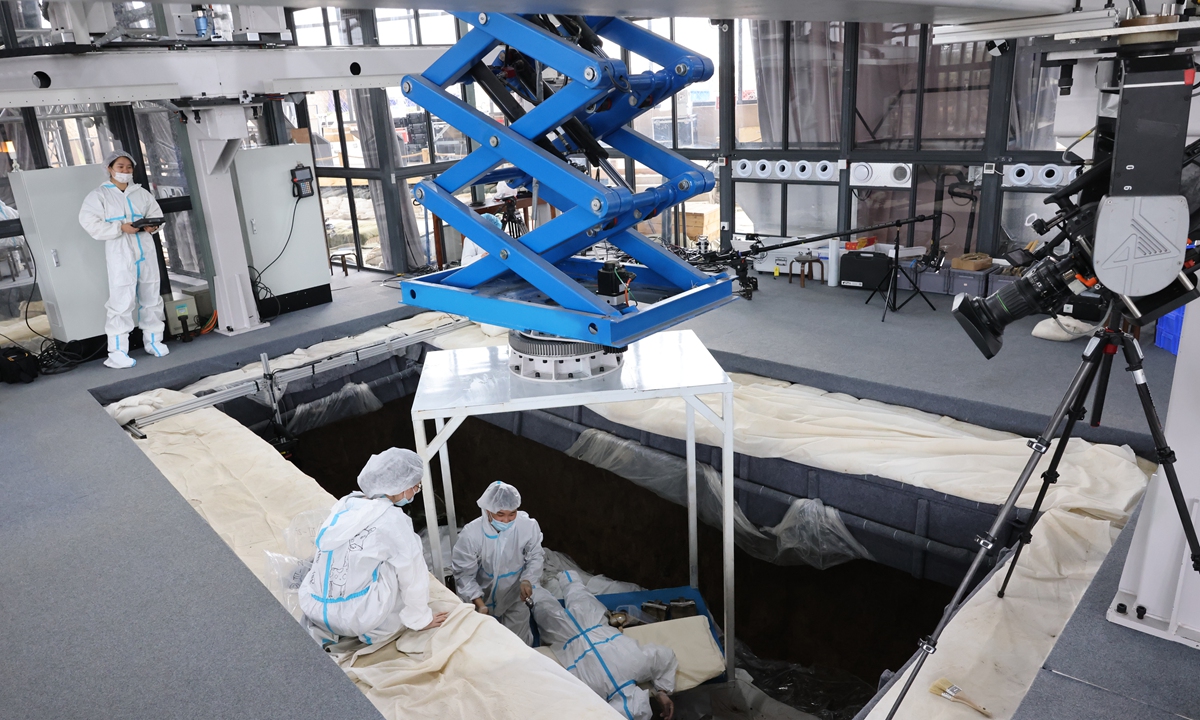 The steady progress of Chinese archaeological science can be reflected in the excavations at the Sanxingdui Ruins.

Due to the connections that archaeology has with ancient history, many people do not associate the discipline with advanced technology. However, nowadays archaeologists are making use of the most cutting-edge technology in their research.

Currently, about 50 archaeologists are excavating and researching six newly discovered sacrificial pits at the Sanxingdui Ruins. They are divided into different teams covering excavation, surveying and mapping, as well as a digital scanning, according to reports from the Chengdu Daily.

There are also four glass work spaces within the building. Each work space is equipped with eight networked cameras and one industrial panoramic camera, which are used to record the entire journey of the dig.

"The building and work spaces maintain the environment of the excavation site and prevent pollutants from the outside world that might harm the cultural relics," Gong Decai, a professor at the University of Science and Technology of China and an expert on cultural relic conservation, told the Global Times on Sunday.

The water-cooled central air conditioning and humidification system at the site help maintain the temperature in the building at about 20 C and the humidity at 80 percent.

Gong said that these technologies are also used at other archaeological sites to protect cultural relics to the greatest extent.

Different types of high-tech equipment are also being utilized during excavation of the Sanxingdui Ruins, including hyperspectral remote sensors and 3D scanning.

With the help of hyperspectral remote sensing equipment, archaeologists are given a new perspective to carry out surveys at the site.

Meanwhile, a 3D scanner can collect data on site without the need to touch objects. Gong said the scanner is much more accurate than any ruler and can better restore the archaeological site's scope and cultural relics, while avoid damage to the site.

The team leader of the Sanxingdui Ruins project told the Chengdu Daily that science and technology have had a great impact on modern archaeology. Archaeology in China has become relatively advanced, allowing workers to uncover relics that would be difficult to be recognized by human eyes and handle organic materials that are easily damaged, such as silk, for on-site extraction. 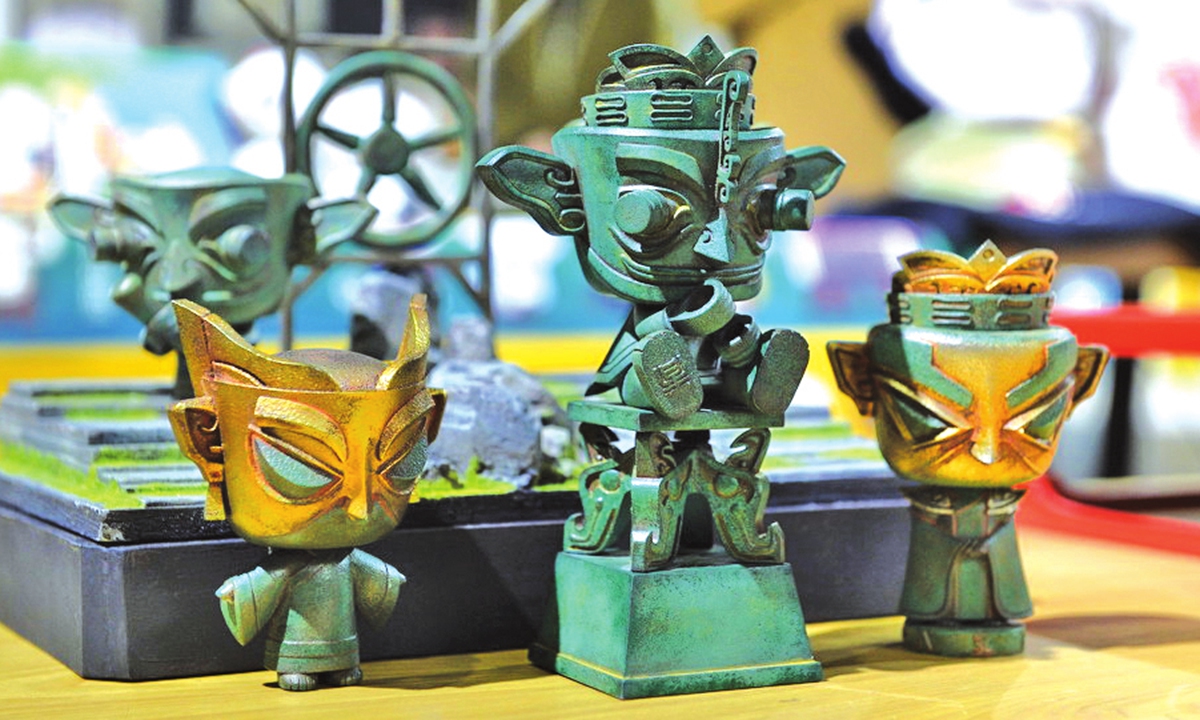 "This made me feel like it is alive again," writes a comment posted on the ingenious music video "Why I am so Pretty!" which combines the 3,000-year-old Sanxingdui Ruins with modern audio-visuals such as techno tunes and a Warhol-inspired presentation. This video and others like it show how China's cultural conservation efforts have embraced creative cross-field thinking and digital tools.

The music video sees ancient relics personified as animated figures who sing and dance to techno club music. It also makes use of neon colors and a rap song sung in the Sichuan dialect with the lyrics: "What do I do, the site is so pretty."

"It is closer to today's culture and caters to people's tastes, particularly those of young people," Zeng, the visual designer behind the music video, told the Global Times, explaining why his music video featuring relics discovered at the Sanxingdui Ruins has gained massive public attention.

Emphasizing that up-to-date interpretations of relics cannot be detached from "ancient culture," Zeng said he believes there are at least three aspects that need to be considered when create an old-and-new cultural remix.

The first is to merge the "traditional" with people's current lives by thinking about "what they prefer culturally, socially and lifestyle-wise, and more, to find one thing that connects you to ancient culture."

Next comes visual language, which needs to be linked to scenes of the ancient world. Last, creators need to think about how to embody ancient culture and how to introduce it to modern audiences more effectively.

"It is a process of deconstructing history and then innovating based on the pieces that are picked up this breakdown. The resulting new creations are introduced to people through digital media channels, which are effective and efficient," Zeng concluded.

Along with creativity-oriented mentality, digital media channels in general have become effective tools that allow new creations to be brought to the people.

Digitally-oriented creative innovation is different but in the same family as the physical cultural creative products that have become so trendy today since they both have the same mission of rejuvenating tradition through cross-field collaboration.

"Physical goods are less effective when it comes to spreading a message, but they cannot be replaced by digital creations. Linking them both together can create a good circular loop that can help the cultural creative industry develop," said Zeng.

"But they both continue our culture and legacy, some of which have already been lost," Zeng emphasized.