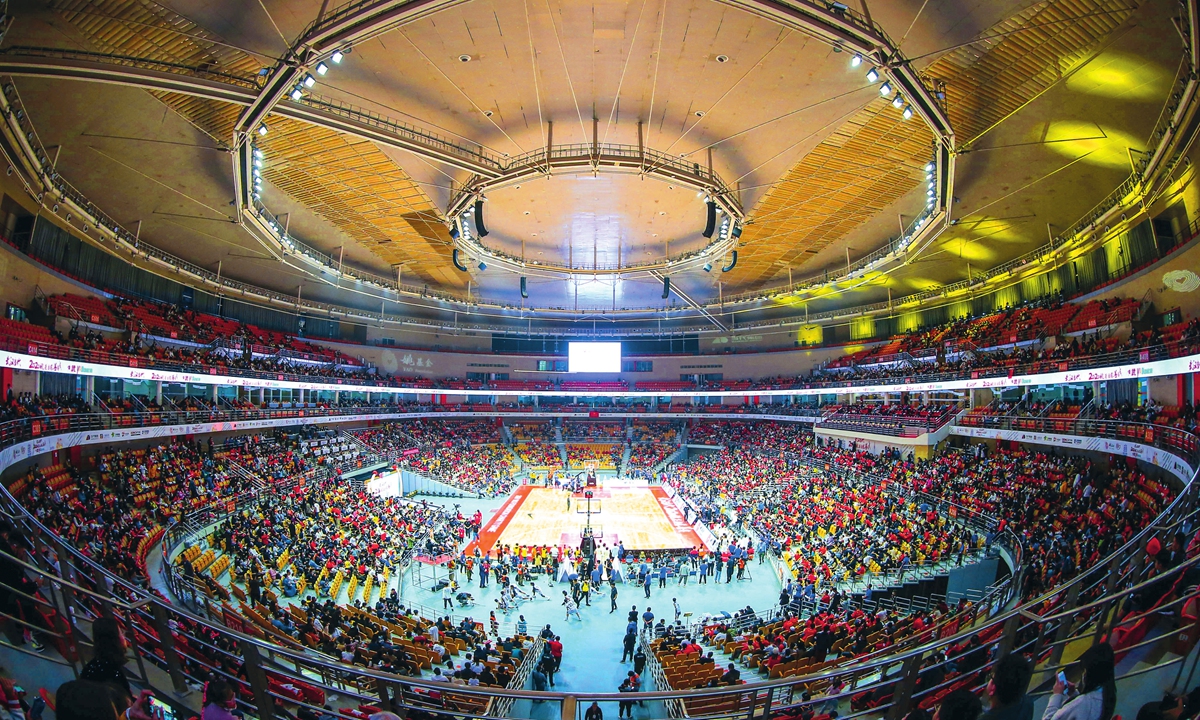 The photo shows a basketball match held in Wuhan sports center on October 4, 2020. The center, which was turned into a makeshift hospital during the fight against COVID-19 epidemic, reopened on that day and the competition attracted over 7,000 audiences.
Editor's Note:

The Chinese people, under the leadership of the Communist Party of China (CPC), have won the tough battle against COVID-19 in Wuhan, the hardest-hit Chinese city, as well as in the whole country. This great achievement has brought great changes to people's fundamental understanding of China's system. As this year marks the 100th anniversary of the founding in 1921 of the CPC and Thursday witnesses the one year anniversary after Wuhan's coronavirus lockdown was lifted on April 8, 2020, Global Times reporters Zhang Hui and Xu Keyue visited hospitals where frontline doctors fought, including the Center Hospital of Wuhan, where Dr Li Wenliang sacrificed his life, and talked to frontline doctors and community workers who were CPC members to learn what CPC members had done in the frontline and what the CPC's real role had been in the battle amid the West's smears and demonization of the CPC. This is the second investigative story the Global Times has produced to mark the Wuhan anniversary. The first was Wuhan gets stronger. 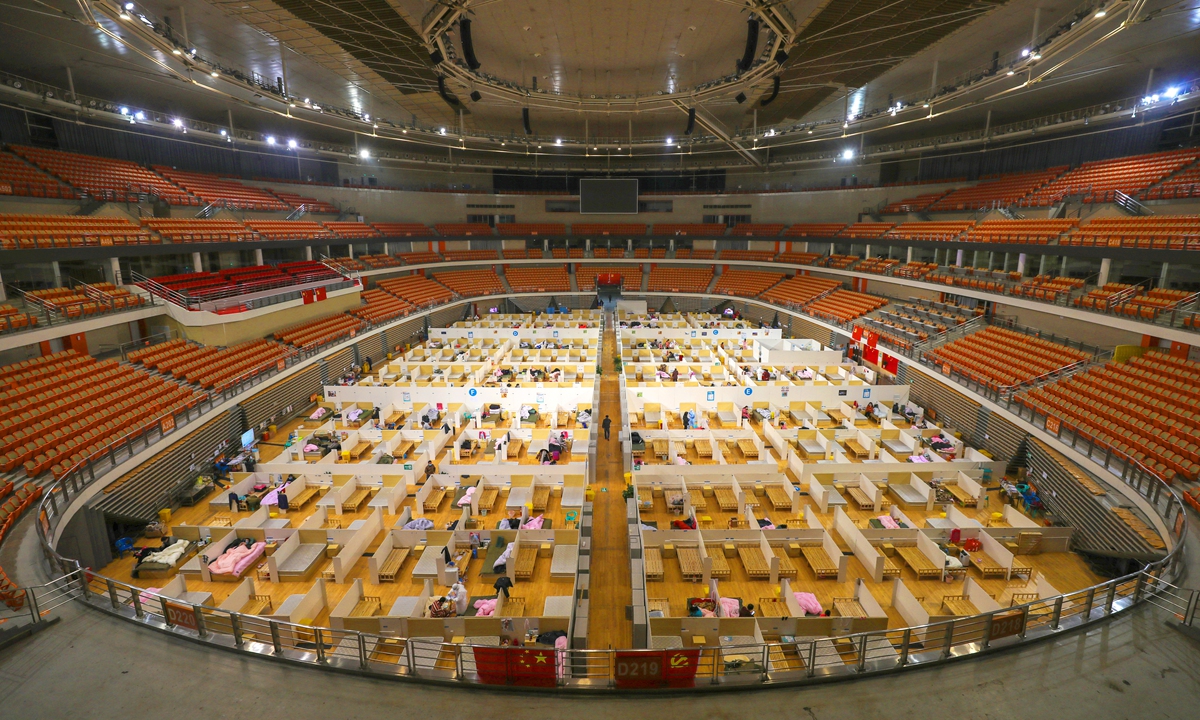 Photo shows a makeshift hospital in Wuhan on March 5, 2020. Most of the COVID-19 patients had been discharged to their residential communities for further quarantine, and only about 100 patients were still hospitalized for treatment. Photos: VCG

On Thursday, April 8, 2021, exactly one year after Wuhan lifted its lockdown, the beam of sun penetrated the dome of the Center Hospital of Wuhan, a local hospital that was tortured by the epidemic in the very early stage in 2020 and more than 200 of its medical workers had been infected with the virus.

A flower petal-shaped information desk sits at the center of the hospital's lobby, with medical workers and patients continuously passing by... A new busy but orderly day began at the Central Hospital of Wuhan.

Rounding the information desk, a long corridor decorated with archived photos tells of the hospital's history. Since 1880 when the hospital was first established, it has saved countless patients.

However, the unexpected outbreak of epidemic was a huge blow to the hospital located near the Huanan seafood market, where many COVID-19 cases were initially detected in early 2020. As of March 9, 2020, in the battle against the coronavirus, the hospital lost four excellent doctors, including Dr Li Wenliang from the ophthalmology department.

One year has passed, and the hospital has learned its lesson from the outbreak. A loudspeaker and billboards put in front of the entrance remind people wearing facial masks to show their health codes before entering the hospital.

A patient waiting in front of the ophthalmology department told the Global Times on condition of anonymity that he was touched by the braveness and honesty of Li Wenliang, also a member of the Communist Party of China (CPC), who had tried to warn other medics of the coronavirus outbreak. The patient was also impressed by the response of the Chinese government in dealing with the outbreak, noting that it was an unimaginable speed to put the epidemic under control.

Li Wenliang was awarded the May 4th Medal with 33 others in April 2020. The May 4th Medal is the highest honor for outstanding Chinese youth jointly awarded by the Central Committee of the Communist Youth League and the China Youth Federation.

In retrospect to the past year after the city lifted its lockdown, everything has returned to normal, said a nurse who expressed willingness to apply for Party membership after being encouraged by Li and other brave and decisive Party members working in the anti-epidemic frontline. "Now, everyone in Wuhan will continue to head forward carrying the courage from them," she said on condition of anonymity, bathing in the sunshine from the skylight.

Li Wenliang was one of the CPC members who shared the determination and spirit of self-sacrifice found among many other Wuhan CPC members who fought the toughest battle against the COVID-19.

The entire Chinese society has deepened their fundamental understanding of China's system, their confidence in the CPC after China put the coronavirus epidemic under control when most countries, including the US as the most powerful country in the world, had fallen prey to the global pandemic. Chinese people knew that these seemingly impossible missions could be achieved only under the leadership of the CPC.

But some forces maliciously depicted Li Wenliang as a CPC member against the system to incite public opinion and attack the CPC, and some Western media and politicians also blamed the CPC for the spread of the virus in and out of China and believed China's all-out mobilization to fight the virus was actually aimed at strengthening its governance.

How exactly did the CPC cope with the public health crisis, and how exactly did CPC members view the CPC's role and their own actions in fighting the disease? Global Times reporters interviewed several grass-roots Wuhan CPC members who were frontline doctors, community workers and volunteers, and joined the battle against the disease to depict the real role of the CPC during the harsh public health challenges. 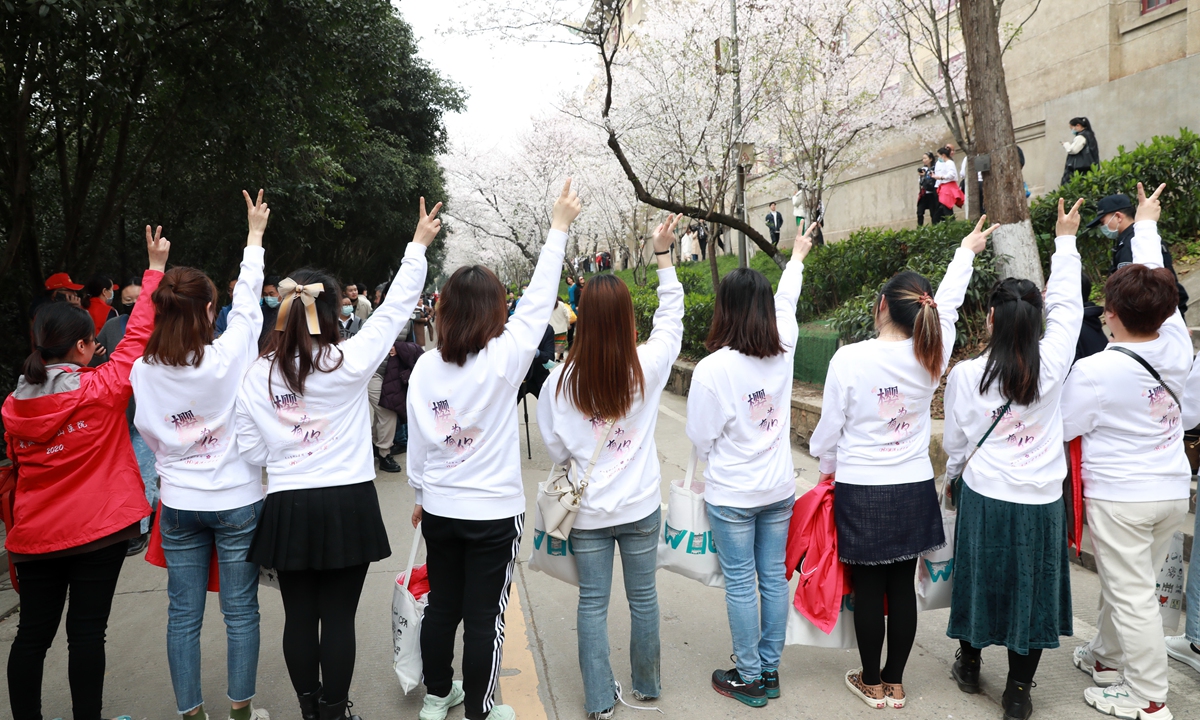 Medics who fought in the anti-epidemic battle in Wuhan arrive at Wuhan University to enjoy the cherry blossoms on March 13, 2021. Photos: VCG
CPC's decisive role

For many frontline doctors who are also CPC members, volunteering to go to the frontline in the battle against the disease in Wuhan was just what they were supposed to do as medical professionals, just like many other Western medical volunteers who volunteered in the pandemic. They were not forced to do it, not forced by anyone.

"Wuhan is my hometown, and I saw my family members get infected, and saw my relatives died from the disease. If I could do something, anything actually, I must stand out to protect my city," Zhou Ning, a cardiologist at Tongji Hospital in Wuhan, who was also infected with the virus during his frontline work, told the Global Times on Wednesday.

Wuhan's frontline doctors who are CPC members made many first steps during the fight against COVID-19, and some like Zhou were infected with the virus, and others scarified their lives like Li Wenliang, but those who survived did not regret what they had done.

They compared what they did during the epidemic with soldiers in battlefield.

"Facing war, soldiers have to rush to the battlefields without any hesitation; In the face of an infectious disease, it's the doctors' duty to fight in the frontline," Zhou said.

When Zhou and other doctors joined the frontline battle in the early stage of Wuhan's outbreak, little was known about the deadly disease.

Hospitals set up quarantine wards and treated patients or suspected patients according to the SARS standards formulated in 2003.

When Zhongnan Hospital of Wuhan University set quarantine wards in early January, it was those doctors who were CPC members who first stepped in the wards.

"The first step those CPC members had made gave the rest of us the strength and confidence to follow their steps," Peng Zhiyong, director of the intensive care unit of the Zhongnan Hospital of Wuhan University, told the Global Times on Thursday.

After the city was placed under lockdown in the end of January 2020, Peng said that one of his colleagues who was already in her hometown made several detours to finally reach the suburbs of Wuhan, and persuaded police officers to let her come back to the city so that she could fight alongside her colleagues.

Many doctors who were not CPC members were deeply moved, and expressed their willingness to join the CPC after the epidemic. Peng said more than 10 young doctors in his department applied to join the CPC.

As for the West's demonization of the CPC, frontline doctors said they knew those were only games played by Western politicians for political purposes, being jealous of China's success in controlling the epidemic.

Wuhan's CPC member frontline doctors who shared their treatment experience with their Western counterparts said US and European medical staff have repeatedly expressed their admiration for China in mobilizing the entire society to fight and control the disease in a short period of time, something their governments would not be able to do.

"In fighting against infectious diseases like COVID-19, the government's timely response such as lockdowns plays a decisive role in cutting the transmission route in communities, and this was exactly what the Chinese government led by the CPC did and this is our Chinese system's unique advantage on display," Peng said, noting that after the lockdown, his hospital has seen a drastic drop in the number of patients.

As for the Western media's claim that the CPC deliberately concealed the real number of COVID-19-related deaths and that the actual number was several times or tens of times higher than the announced number, several doctors used examples in their hospitals to refute such allegations.

They said that around 80 percent of patients with serious symptoms recovered and were discharged from the hospitals, and each hospital had tried their best to save every single patient, not like in some Western countries, which simply gave up treatment of the elderly people.

Zhou said that CPC members' leading role in frontline work and the CPC's leadership in fighting the disease was something that no Western country could replicate.

"Many of my friends in the US and Europe said that prevention of the disease was all conducted by themselves, which was due to a lack of organization and united strength. Even distributing vaccines was rather chaotic. Order and organization is impossible for many Western countries," Zhou said. 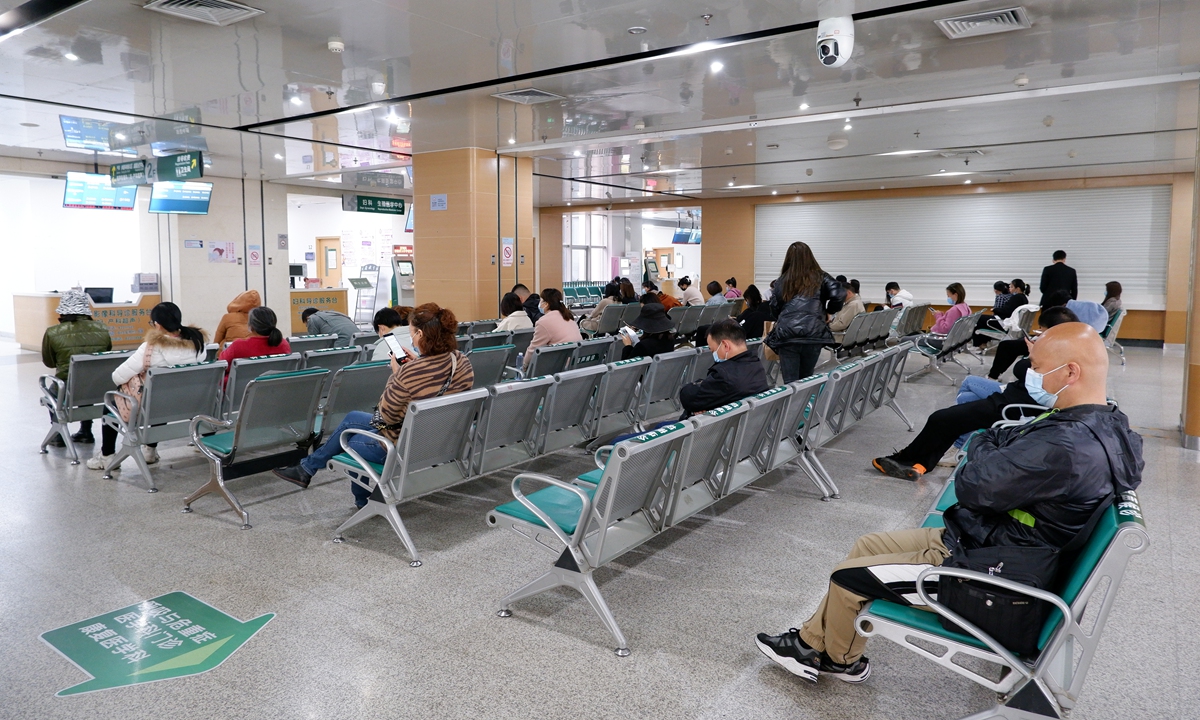 Patients wait for their turns to see a doctor in an outpatient building of the Central Hospital of Wuhan on Thursday. Photo: Xu Keyue/GT
Mobilizing people, serving people

Not just frontline doctors, the Chinese government under the leadership of the CPC mobilized the entire Chinese society in the battle, which was key for China's success in the fight.

During the epidemic, Wuhan residents in all sectors were mobilized to join the battle. Some were volunteers in communities, some helped to pick up patients, some assisted seniors get food and daily necessities, some loaded and offloaded donations from across the nation.

Yang Xi, a community worker in Jianghan district, also a Party member who volunteered to help families and patients get to hospitals with her colleagues, shared her story of the how government's successful mobilization helped solve difficulties in her work.

Yang said that the grandson of a local old couple, both were confirmed to have been infected with COVID-19, asked her for help after he failed to send his grandparents to be hospitalized due to a shortage of beds in late January 2020.

Finding a bed was the most difficult part for Yang at that time when almost all hospitals had no extra beds, and Yang had been stuck in the office by anxious family members who demanded her find a hospital immediately for their loved ones.

When the government agencies in charge learned about each situation, they immediately came up with solutions to solve it. Wuhan mobilized migrant workers and other construction companies to build two hospitals - Leishenshan and Huoshenshan - in just 10 days and renovated public venues into makeshift hospitals. 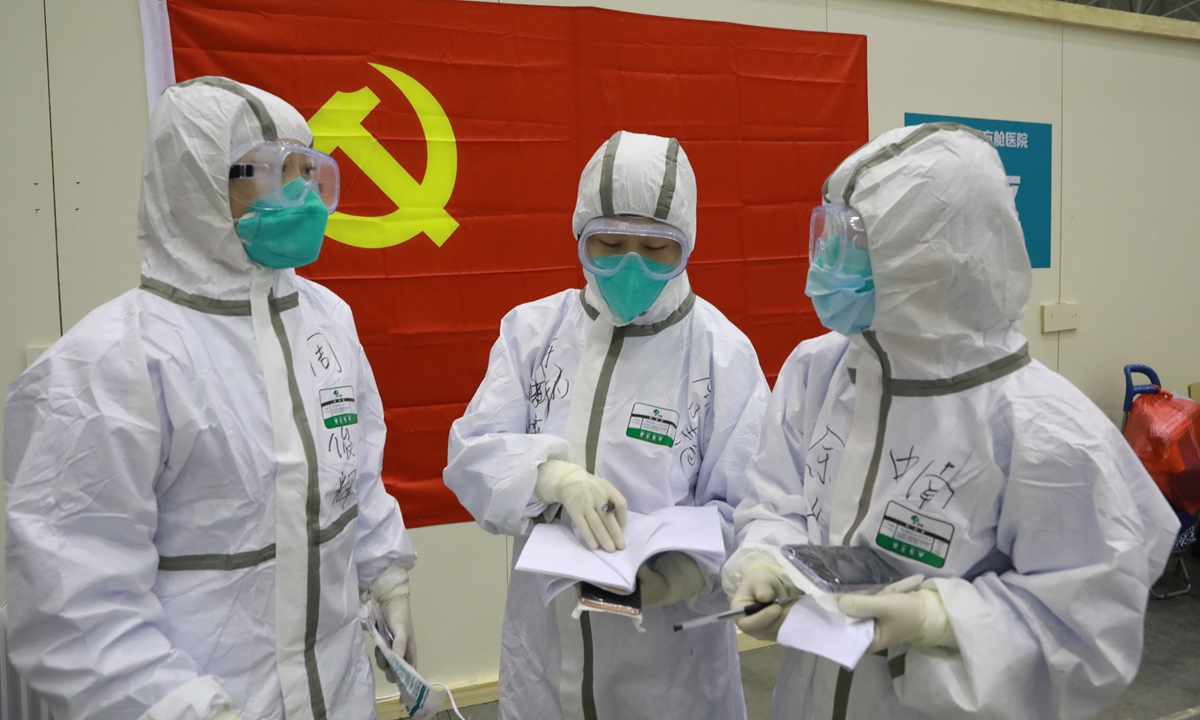 "The Leishenshan and Huoshenshan hospitals greatly eased the challenges regarding the shortage of beds, and the makeshift fangcang hospitals took in all the patients with mild and minor symptoms. We finally did not need to help patients find hospital beds," Yang said.

CPC members said that this meant the CPC always pays attention to what people really need and always serves them wholeheartedly.

"After the epidemic, we feel like no difficulty can bring us down [in the future]," Wang said.