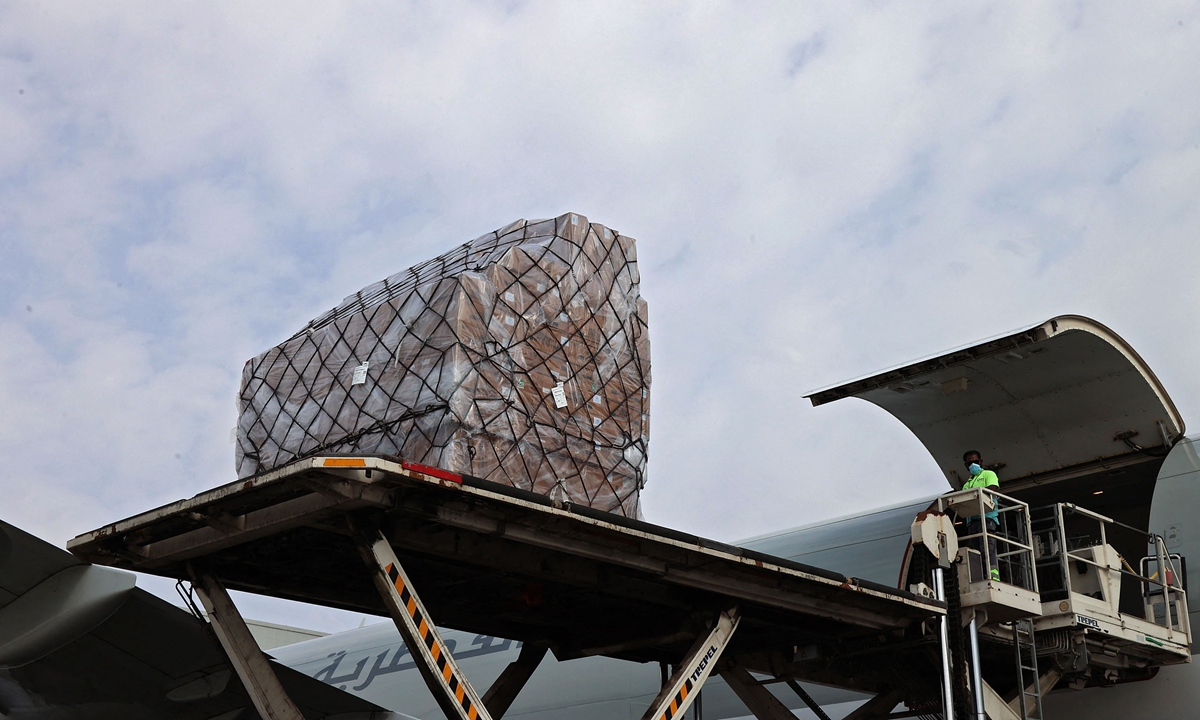 Workers load 300 tons of medical aid to be flown in a three-flight cargo aircraft convoy directly to destinations in India, at Qatar's Hamad International Airport in the capital Doha on May 3, 2021. International assistance is pouring in India as the country fights the devastating COVID-19. Photo: VCG
Editor's Note:

This is the second part of an in-depth investigation into China's assistance to India during the worst COVID-19 epidemic. 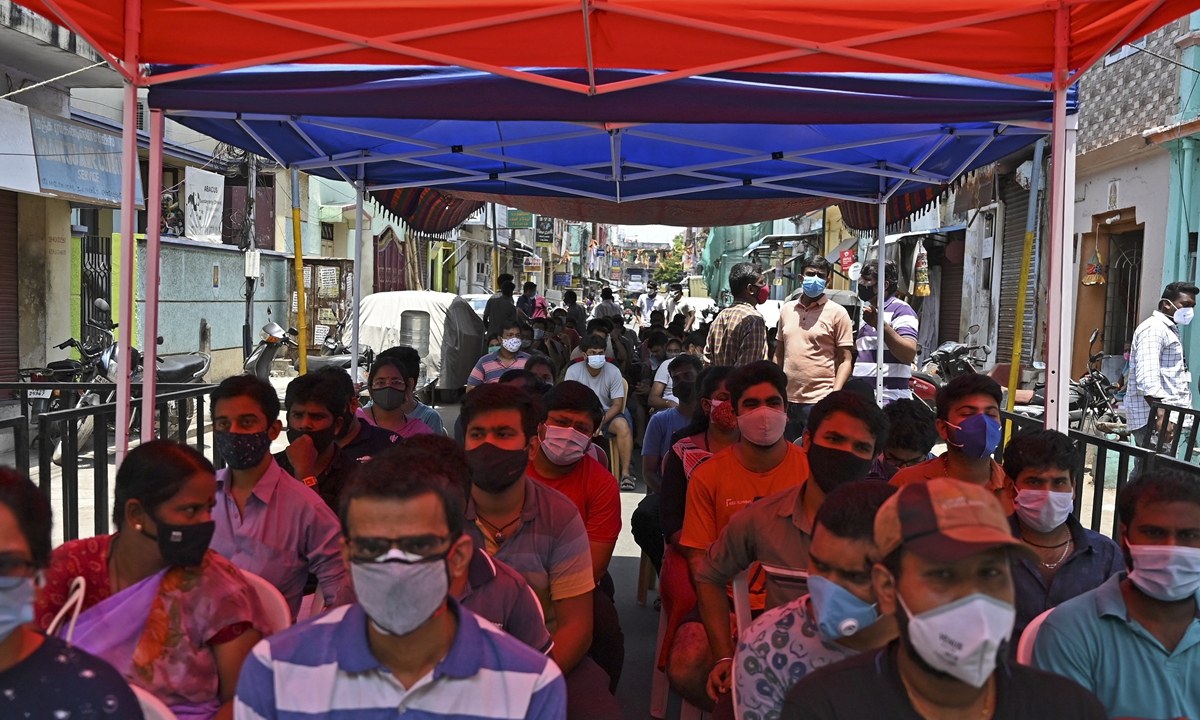 Indians between 18 and 44 years old wait to get a dose of Covishield COVID-19 vaccine, their domestically made version of AstraZeneca, at a vaccination camp in Chennai on Thursday. India on Thursday reported 276,110 new infections and 3,874 new deaths in the past 24 hours, bringing tally of cases to 25.8 million and death toll to 287,122. Photo: AFP

As India struggles with the worst COVID-19 outbreak yet with record infection cases and deaths and dire shortages of crucial supplies, some in the country have resorted to knee-jerk reactions - blaming China groundlessly for suspending flights, controlling exports of raw materials to India and raising prices.

However, an investigation conducted by the Global Times showed a completely different picture from what some Indian media outlets and politicians have depicted. Instead of cutting supplies, Chinese airlines and logistics firms have been working to increase flights to carry desperately needed medical supplies to India, even as they face mounting risks and hurdles, companies and sources told the Global Times.

Not only was China among the first handful of countries that offered medical support to India, but it has provided the largest air cargo capacity for India - accounting for 60 percent of air cargo flights into the country, as China, a manufacturing power, has been a key source of support for India to maintain its economic operation.

Such efforts to extend India a lifeline during the country's devastating COVID-19 crisis, despite tensions in bilateral relations and growing Indian hostility toward China, underscored China's commitment to helping the global fight against the pandemic, after it successfully reined in the deadly virus domestically, analysts noted.

Further highlighting such a commitment, China's assistance to India, which is out of sincerity and goodwill, is fundamentally different from those of certain countries, which are seeking something in return, the analysts said.

Data from industry information provider VariFlight showed that from April 1 to May 17, there were 427 international cargo flights to India, and flights from China accounted for nearly 60 percent - of which flights from the Chinese mainland comprised 31 percent, followed by 28 percent from Hong Kong - and 17 percent from the US.

Even for air cargo between China and India, Chinese carriers also have accounted for 70 percent in terms of flights, and one single carrier from China has more cargo flights than the total from the US.

"The data is quite impressive, and it shows that China has always been in low profile for such help, which shows our responsibility and courage," Zheng Hongfeng, CEO of VariFlight, told the Global Times.

Data shows that Sichuan Airlines, which was reported by Indian media to have suspended cargo flights, has accounted for 23 percent in terms of flight volume, ranking first in cargo transport from April 15 to May 16.

A source from Cathay Pacific said that in the past, the goods transported were equipment, fabrics, chemicals, and mobile phones, and now oxygen generators are the main transported product.

Although FedEx on Monday announced the arrival of a second charter flight carrying medical aid to India, including more than 780 oxygen concentrators and 1.8 million KN95 masks, data showed that no matter from the transport from the US to India, or from China to India, FedEx has a smaller share compared with Chinese rivals.

A company that has never carried cargo flights to the country also applied for cargo routes, according to an insider who preferred not to be named from one state-owned carrier.

Indian volunteers take coffins of victims of COVID-19 to cemetery in Bangalore on Tuesday. Photo: Xinhua
Delivery despite risks

Behind the rising cargo shipments between China and India is the exiting mature logistics connections between the countries for years, but now for companies there is also the reason for seeking better profits as demand rockets.

SF Express started its international express services in India in 2016. Shandong Airlines said since first from Kunming-Delhi passenger-to-cargo flight started on May 1, 2020, it has flown 166 flights and transported 1,271 tons of cargo.

However, faced with rising profits, an insider from a state-owned carrier said the flight epidemic prevention risk to India is disproportionately high, given the country's ravaging epidemic situation.

He said the cabin crew may face human-to-human infection risks, even if they are vaccinated, and there are also materials at risk when making container sterilization, just like previous cases of cold-chain goods.

"If one person gets infected, the whole crew will also have to be under quarantine, and it will also bring losses to the carriers," he noted. 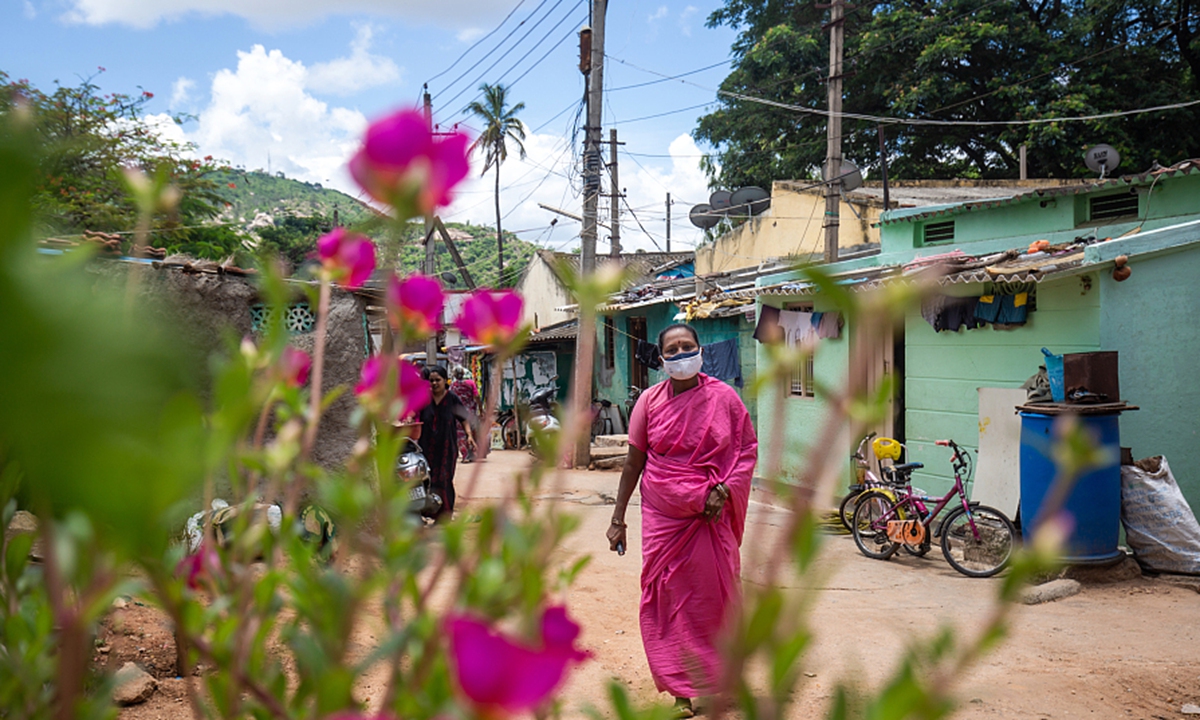 Although China is willing to help India fight the epidemic, exporting goods to India still has challenges for Chinese companies.

A general manager surnamed Yao from a medical supplies company in Chengdu, Southwest China's Sichuan Province told the Global Times that the flights between China and India are tight, and many freight forwarders are unwilling to receive goods to India.

On the one hand, they are worried that Indian customers may not have sufficient customs clearance capabilities. On the other hand, they are also worried about the epidemic prevention policies. If any adjustment is made, the goods will be stuck at the domestic ports, she said.

Besides the freight, jammed ports and paralyzed local logistics systems have drastically increased the cost of shipping, which added up the prices of medical equipment when they reach patients in India.

Compared with March figure, the price of shipping from China to India has almost quadrupled in May, according to Xie Cheng, a manager from Kahan International Import and Export, a logistics company based in Foshan, South China's Guangdong Province.

For a small container to be delivered to India, the price spiked to almost $2,000 by the end of April, compared to around $500 in normal times, Xie said.

"The prices went up mostly because it is one-way shipping but with the cost of two-way travel," he said. "The vessels delivering to India return with empty containers to China."

The price tripled in April, then continued to soar in May because the situation in India is fast deteriorating, Xie noted.

But the epidemic has practically paralyzed the Indian logistics system around the ports, which means many medical supplies are stranded at the ports waiting for collection.

The cost of storage at the ports also went soaring. At the port of New Delhi, the cost of storage went from 10 rupees ($0.14) to 50 rupees per day for a small cabin. For local dispatches, the companies can't find a driver even if they pay up to $1,000, compared to around $500 for a delivery from New Delhi to Mumbai in normal times, Xie said.

At Mumbai Port, at least one-quarter of local truck drivers had been absent from their posts from April, according to Xie.

"Many of the local drivers could not come to work, either because they are sick, or because their family caught the disease," Xie said. "And the vast majority of companies in India are working from home, so there's no one to receive the deliveries."

All the additional cost caused by jammed logistics will be paid by his clients, Xie said, which will eventually end up adding extra pressure on patients and families buying the much-needed products.

Chinese supplies back up Indian economy

The epidemic has created a huge gap in India's economic growth, and the weak manufacturing industry has been a long-term problem for the country. India previously purchased a large number of hospital disinfection facilities, virus detection reagents and other products from overseas markets. Its local medical material manufacturers are far from enough to meet the soaring needs during the epidemic.

Unlike China which has become a manufacturing powerhouse, a lack of manufacturing capacity has long been a structural weak point in India's economy. The weakness is highlighted by the epidemic, and the gap between India's and China's manufacturing capabilities have made China a key source of support for India to maintain its economic operations.

China overtook the US as India's biggest trade partner in 2020, but despite an increase in bilateral trade, there is a significant asymmetry in the China-India trade relationship. India relies heavily on China's exports, far exceeding the extent of China's dependence on India.

Most of India's imports are from China. In 2020, $58.7 billion worth of goods were imported from China to India, more than the total Indian imports from the US and Saudi Arabia. In contrast, India ranks 16th among China's trade partners, and trade with India represents only 1.88 percent of China's total foreign trade.

Due to its lack of industries, most of India's imports from China are manufactured products which are key to its many economic activities, including electrical machinery and equipment. In 2020, India imported $17.82 billion in machinery, the biggest category of its imports.

Analysts said the lack of a manufacturing capacity has made India a key beneficiary of China's manufacturing power. India's economy integrates into the world economy mostly with service industries such as software outsourcing, but lacks a manufacturing foundation, which is a fatal flaw during the epidemic.

"China is willing to cooperate with India through multiple channels in helping it fight the epidemic, and we believe India can conquer it," Chinese Foreign Ministry spokesperson Wang Wenbin said in April.

On Tuesday, the Indian government announced that the number of new deaths in a single day hit a new high to 4,329, and the number of new confirmed cases was 263,533. Although the terrible record of keeping more than 300,000 new cases in India for 25 consecutive days ended on May 17, the situation remains grim.

The pressure of India's epidemic prevention can be imagined, but some Indian media have been watching China closely, as if the country's crisis was partly caused by China.

The Times of India claimed that China controls the export of raw materials to India, which caused the price of new crown-related drugs in India to soar. In an interview with the South China Morning Post, Priyanka Chauhan, India's consul-general to Hong Kong, called on China to help stop surging prices and increase cargo flights to get urgently needed supplies to the epidemic-ravaged country.

Qian Feng, director of the research department at the National Strategy Institute at Tsinghua University, told the Global Times on Wednesday that due to changes in China-India relations, Indian media representing the elites have been critical of China in recent years. "This will not change even though China is actively exporting anti-epidemic materials to India."

In the face of criticisms from India, the Chinese government has still continued its efforts to help the country.

"Under the epidemic, no country can survive the epidemic alone," Qian said. "As India's neighbor, China never seeks reciprocation when helping India. It is China's big-picture thinking, and is in drastic contrast with the prejudice held by some Indian politicians and media against China."