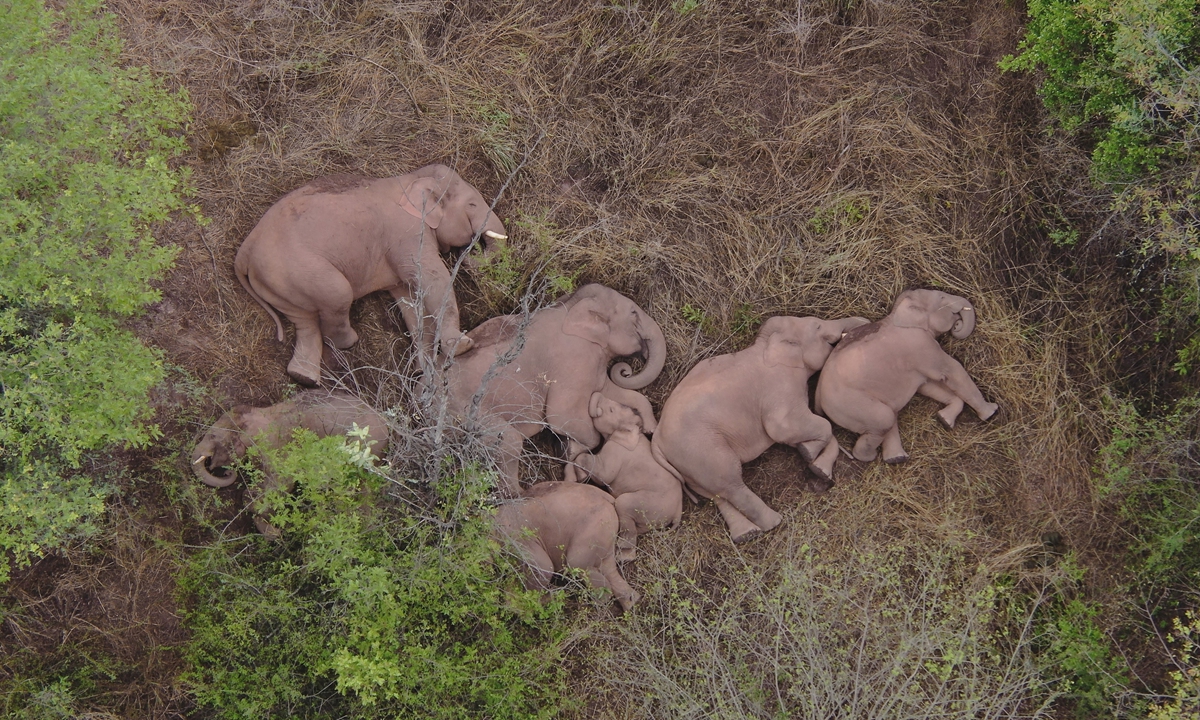 The members of a wandering wild elephant herd have become social media stars in China and around the world since they left their home in the Xishuangbanna Dai Autonomous Prefecture, Southwest China's Yunnan Province.

Xishuangbanna, a frontier area bordering Laos, boasts the best preserved tropical ecosystem in China. A quarter of all the animal species in China live in the area, while one-sixth of the country's plant species call it home.

Through the conservation efforts, the number of wild elephants in the region has increased to around 300 from 150, and the population of black snub-nosed monkeys has also doubled within two decades.

However, there are still many challenges remaining. The wild herd is a reminder that protecting the natural environment is still an urgent issue. Asian elephants cannot live without relying on natural plant resources. They eat fruits and tree barks. Yew trees are a valuable plant species that naturally produces a chemical used in cancer treatment. It is one of 150 plants in the province listed as a national-level rare and endangered species. Outside of Xishuangbanna, this treasured tree also grows in other national nature reserves such as the Yunlong County Reserve in the province. The dragon tree is another distinctive tree species. One of the world's most long-lived trees, the dragon tree can reach 8,000 years old. The tree has a short trunk and rough light brown bark. One of its most distinctive features is that the sap from the tree is blood red. According to legend, dragons once fought with elephants and whereever the dragons' blood hit the ground, these beautiful trees would later sprout. The sap is also used in traditional Chinese medicine to treat bruises. 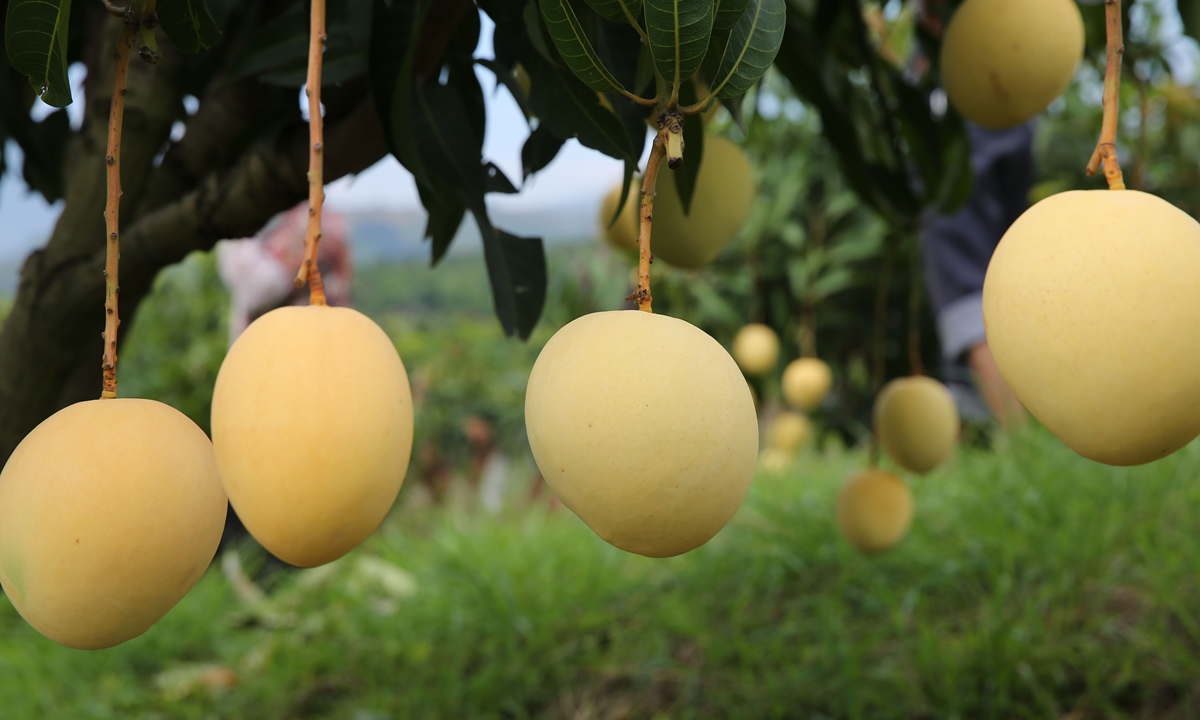 Asian elephants are also big eaters of a variety of fruits such as bananas and mangos. Xishuangbanna holds the title of "natural orchard" due to its unique rich variety of tropical fruits. Mangos and 10 other fruits, including passion fruit and pineapples, are becoming the backbone of agricultural income in the area. Xishuangbanna's "mango" category includes different types such as the "coconut mango," which has a distinctive coconut scent. 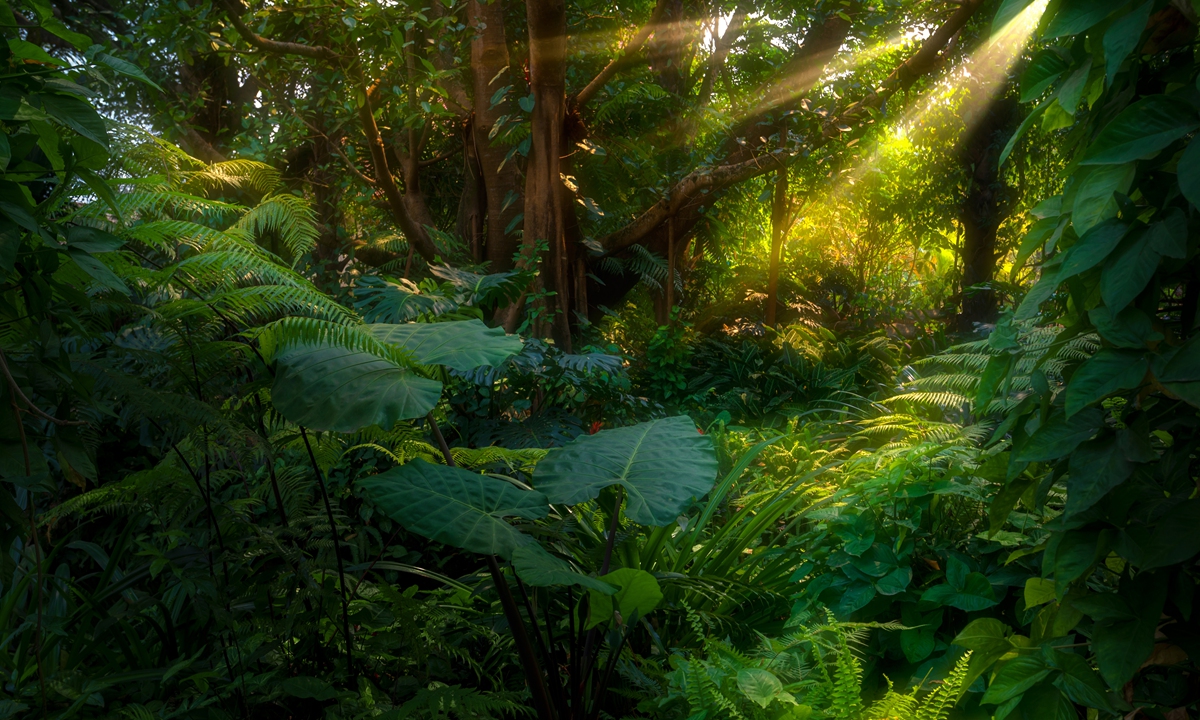 The Asian elephant is the largest land mammal on the Asian continent. They live in dry to wet forest and grassland habitats in 13 countries spanning South and Southeast Asia. Around 300 of these elephants have settled in Southwest China's Yunnan Province, living off the land, while playing an important role in ecosystem.

Elephant droppings are vast storerooms of nutrients for other animals as the digestive system of elephants is relatively weak and so they discharge a large amount of semi-digested food daily. The excrement is rich in plant fiber seeds and various organic nutrients. Some smaller animals in Xishuangbanna's rainforests such as birds and frogs feed on the insects and plants that live off this excrement. 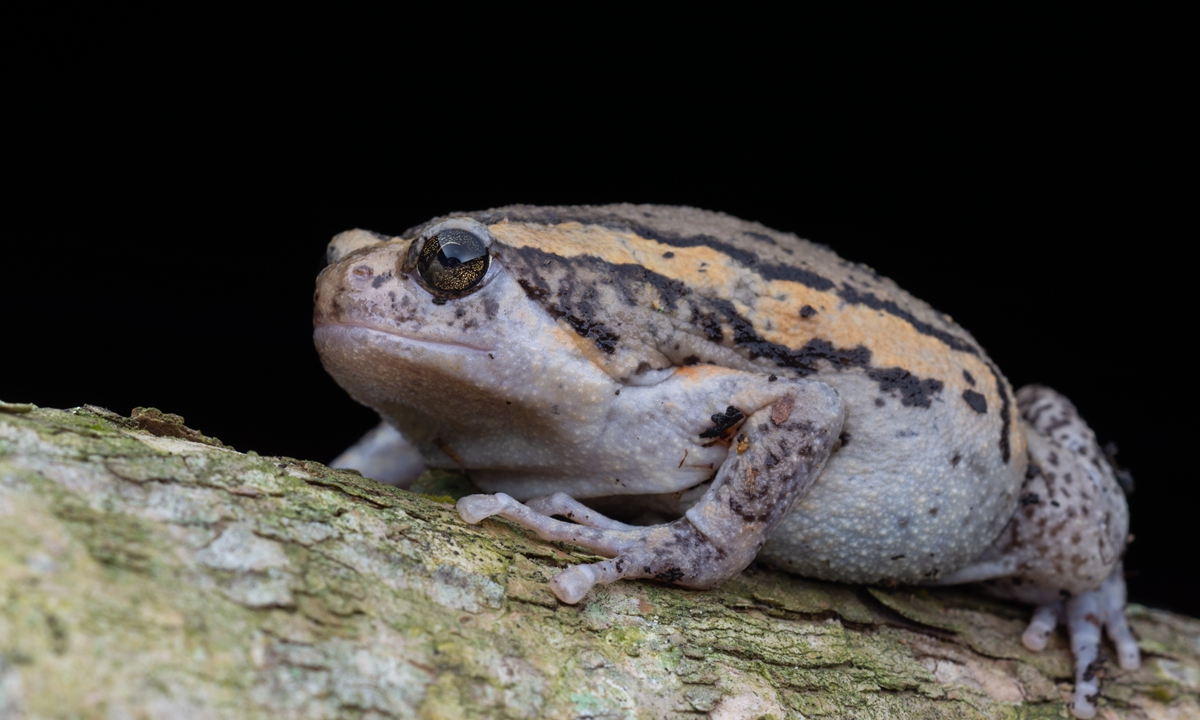 More than 20 ranid species of frog live in Xishuangbanna. The banded bullfrog, also known as the Asian painted frog, has a round body with a mahogany brown back and a cream-colored stomach. The distinctive stripes down its side can range from copper-brown to salmon-pink in color. 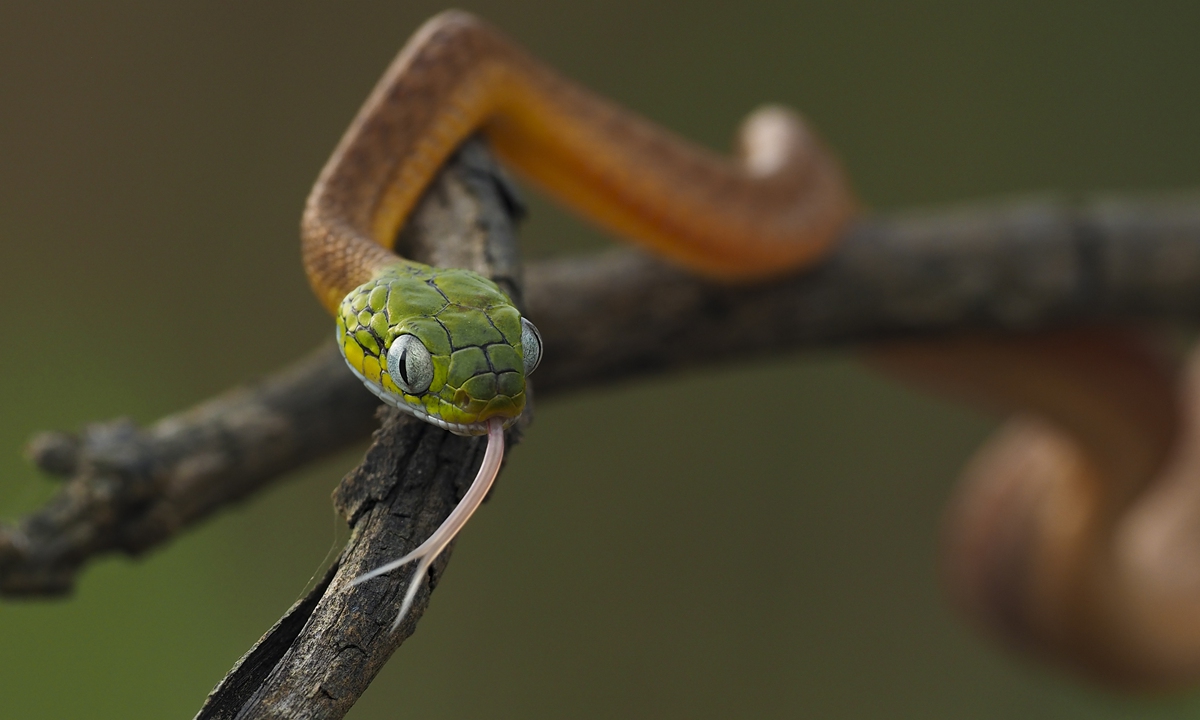 The green cat snake is a medium-bodied snake with a moderately long tail. The snake's head has a distinctive narrow neck with a round snout, while its back is usually a uniform green or green mixed with gray. Frogs are the main source of food for snakes that live in rainforests. The large variety of frogs that live in Xishuangbanna make the area a heavenly buffet for these predators. 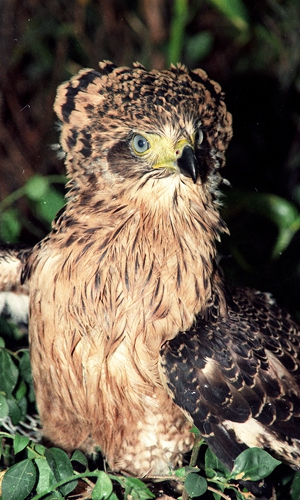 The crested serpent eagle is a medium-sized dark brown bird of prey. The eagle is stocky, with rounded wings and a short tail. The short black and white feathers on the back of its head create a fan shape that makes its neck look particularly thick. The bird's underside is yellowish-brown spotted with white. 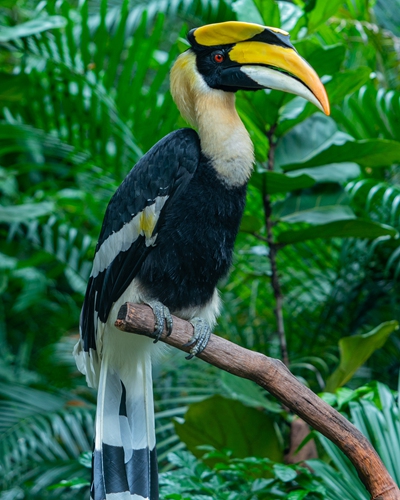 About 420 bird species live in Xishuangbanna, including the great hornbill. Also known as the concave-casqued hornbill or great pied hornbill, it is one of the larger members of the hornbill family. Its most prominent feature is the bright yellow and black casque on top of its massive bill. 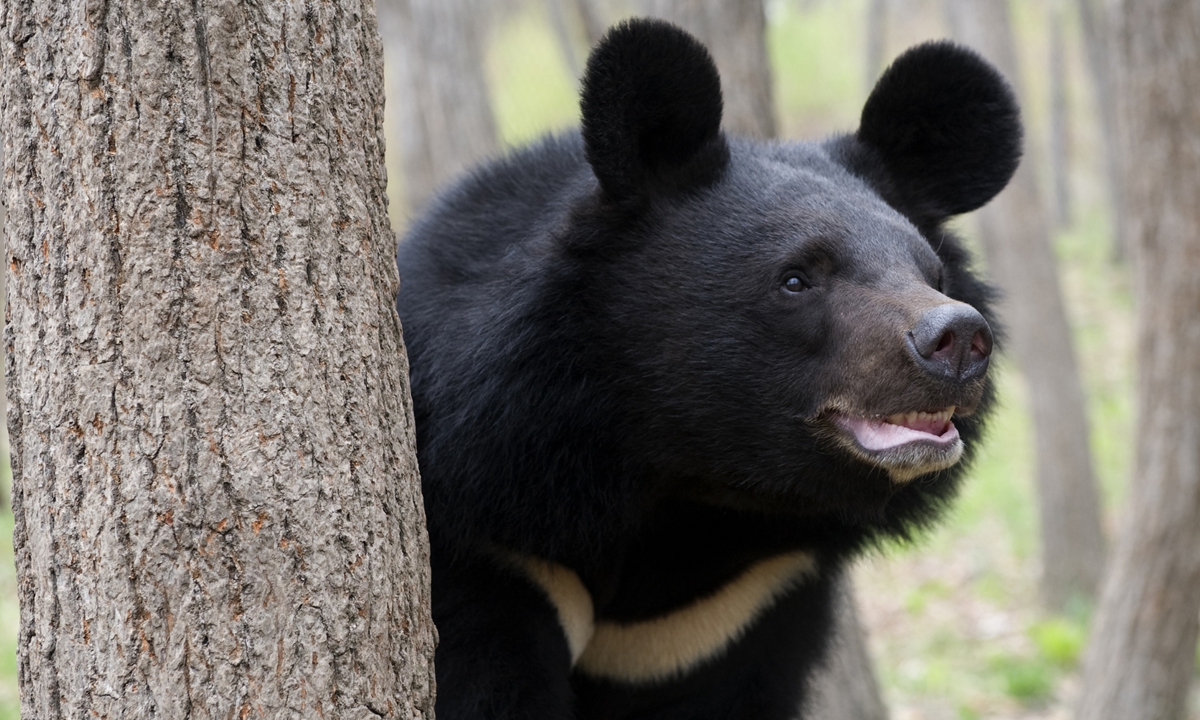 The Asian black bear is a medium-sized bear with black fur, a brown muzzle and a distinct white patch on its chest. Excellent climbers, they will often escape enemies by heading up trees or rocks. 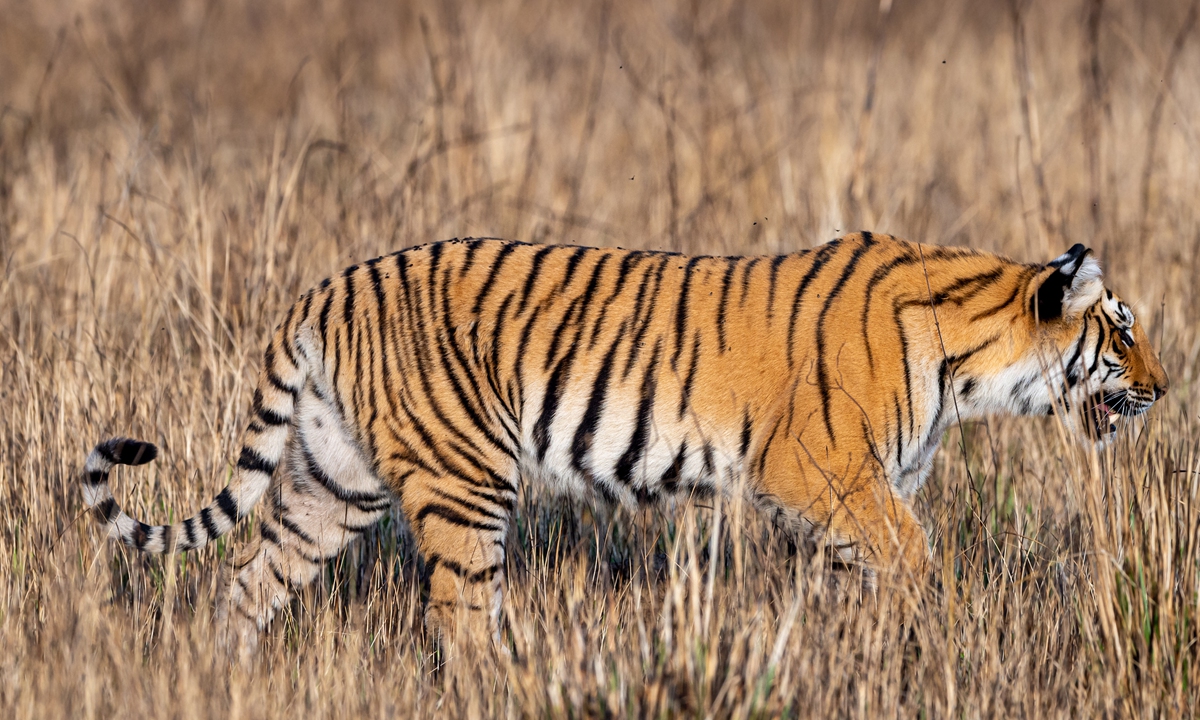 The Indochinese tiger's skull is smaller than that of the Bengal tiger, while its coloration is darker with rather short and narrow single stripes. It has been listed as endangered on the IUCN Red List since 2008.

2016-20: During the 13th Five-Year Plan period, the Yunnan government has carried out more than 120 projects to protect species with extremely small populations and has established 30 protection zones, 13 habitats and 5 experimental bases for the revitalization of species.

A total of 67 wild plant species have been protected and recovered.

The number of Asian elephants in the Xishuangbanna area has grown from 150 in the 1980s to about 300 today. They receive A-level state protection.

Source: Department of Ecology and Environment of Yunnan Province

Striking a balance between economic development and conserving the natural environment is a particularly challenge. The habitat for the Asian elephant has been reduced by 40 percent due to the expansion of tea plantations and rubber groves to develop the local economy. Conversely, the local elephant population has been growing over the past two decades. As such, conflict between the agricultural economy and the survival of elephants inevitably occurs.

According to Zhang Li, a field wildlife biologist and professor in mammal conservation at Beijing Normal University, over the past three years Asian elephants in the prefecture have caused more than 35 million yuan ($5.4 million) in damages.

"It is difficult to completely eliminate the conflict between humans and elephants, but as long as humans can take into account the survival needs of elephants while pursuing their own development, it is possible to achieve harmonious coexistence with elephants. Habitats are fundamental to the survival of wild animals. We must start with strengthening the protection of elephant habitats," Sun Quanhui, a scientist from the World Animal Protection organization, told the Global Times.

Zhang pointed out that some experts have recommended that Yunnan capitalize on its unique natural ecosystems by shifting toward a "green GDP goal" when it comes to economic development.

"Adjusting the local economic system and finding alternative agricultural livelihoods for tea and rubber farmers can be a means of sustainable development that protects the tropical rainforest ecosystem and the Asian elephant. Although rubber and tea can provide economic returns in the short term, in the long run, if the ecosystem is lost, the economic losses stemming from that is also obvious."

From 1992 to 2020, a total of 3,718 new species have been discovered. More than one third of new species in China have been found in Yunnan.