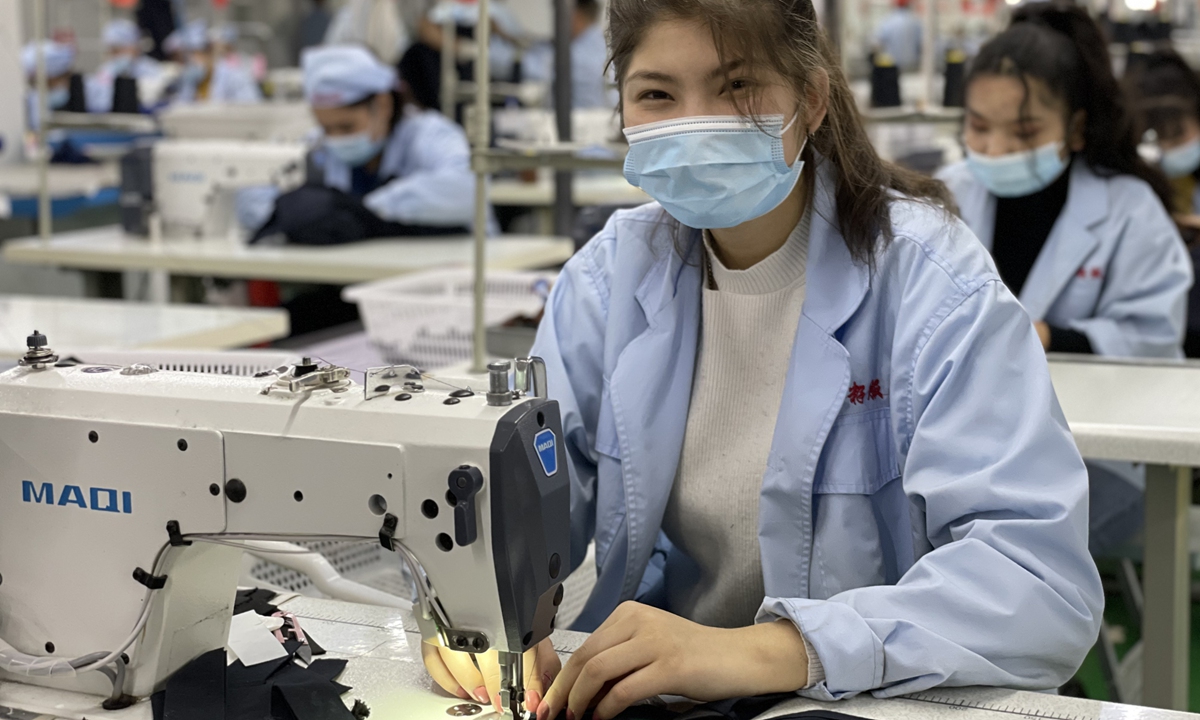 A worker in a factory in Northwest China's Xinjiang Uygur Autonomous Region agrees to have her photo taken. Photo: Fan Lingzhi/GT
Editor's Note:

Do "human rights" have a price? The answer is Yes, when they are used by the West and the US to interfere with other countries' domestic affairs. The Global Times has learned exclusively from sources that US-based nongovernmental organization (NGO) Worker Rights Consortium (WRC) blackmailed a Chinese company and its US cooperative partner for $300,000 by threatening to hype up fabricated "forced labor" issues related to China's Xinjiang Uygur Autonomous Region.

The Global Times learned exclusively from the national security department that on October 17, 2018, the legal representative of a garment manufacturing company in Hotan Prefecture of Xinjiang, which is affiliated to a company in Zhejiang Province, received a phone call from the Associated Press and The New York Times, asking him to explain on the company "using illegal labor to manufacture US brand clothes." One day before, the company's name appeared in local media reports for its contributions to local poverty alleviation work and the news also introduced the function of the vocational education and training centers in helping reduce poverty.

Although the legal representative refuted the claim that the company was using illegal labor, the AP released a report later, saying that the company hired people from "re-education camp" to make clothes, and it also cited untenable claims of "1 million Muslims are detained," made up by anti-China scholars and separatists.

Nathan Ruser, a cyber-policy researcher at the Australian Strategic Policy Institute (ASPI), appeared in the AP report, claiming that by analyzing satellite images, he found that the Hotan-based apparel factory and a so-called government-run training camp were connected by a fenced path.

The AP story also targeted US-based Badger Sportswear, saying that according to US customs data, in April 2018, Badger began importing 100 percent polyester T-shirts and pants from the Hotan company, and the address on the shipping records is "the same as for the detention camp."

The inflammatory report of the AP was later cited by other foreign media. Coincidentally, the Global Times noticed that Scott Nova, executive director of the WRC, released a statement almost at the same time when AP released its report, saying that it will "continue to seek further information from Badger concerning the production of its goods by internment camp detainees in Western China," and that "simply announcing that it is ceasing placing orders with this particular factory is not an adequate response."

Without any evidence, the WRC continued to hype the topic and pressure the Zhejiang company and even asked it to release the Hotan company employees' personal information, including their gender, name, job title and salary.

On June 24, the WRC released an assessment, saying that "based on communication with Badger and with Chinese human rights researchers and on review of US Customs records and relevant corporate documents," the WRC "was able to swiftly confirm" that Badger had been produced goods in plant with "forced labor" being used.

The WRC also noted in the assessment that its "investigation" involved reviews of satellite imagery, "a range of original documents, as well as secondary source material from other researchers." It also admitted that it was unable to interview workers in Xinjiang but ascribed it to the "repressive environment" in Xinjiang.

The Global Times has tried to contact the legal representative of the Hotan company for an interview but was declined as the person did not want the company to be involved in media reports to avoid further trouble. Is it true as the WRC claimed that there is no possibility to have field investigation in China's Xinjiang? Or is it their tactics to give pre-set conclusions?

The Global Times has learned that pressured by the WRC and the US customs department, Badger turned to Ropes&Gray law firm to conduct an investigation and the latter contacted with the Hong Kong branch office of Alvarez&Marsal, a global professional service firm. The Hong Kong office then commissioned the task to its Shanghai office.

Without acquiring qualification for any domestic investigation, the Shanghai company sent employees in December 2018 to Xinjiang and Zhejiang to "investigate" on whether the Hotan company is located within the training center and whether there is forced labor.

On April 7, officials from the market supervision and statistical departments began actions against the Shanghai company's illegal investigation. Meanwhile, police officers from national security department also told the Global Times that after receiving tip-off from local residents, they began to work on the case for its suspicion of jeopardizing national security.

The Global Times learned from police officers that during the investigation, employees of Shanghai Alvarez&Marsal said that they did not find any evidence of "human rights violations" and workers of the Hotan company enjoyed freedom with their salary being paid in accordance with market rates.

Employees from Shanghai Alvarez&Marsal expressed anger with the US for not admitting the result of their investigation and insisting on pressuring Chinese companies. "News in the US [on Xinjiang] is absurd… What they want is not what we saw… our report clearly did not meet their demands… they want something negative," an employee who went to Xinjiang for the field survey said.

Alvarez&Marsa's Shanghai office is not the only company that had conducted "investigations" on the case. Following the Western media's continued hyping of "forced labor" topics about the Hotan company, in December 2018, Worldwide Responsible Accredited Production (WRAP) also denied human rights violations in the company after investigation.

In March 2019, Business Social Compliance Initiative also concluded after investigation that the Hotan company did not hire children as labor or use "forced labor." In April 2019, WRAP's third review also ended up with conclusion of no violation of human rights.

The WRC had turned blind eyes to the above investigations and conclusions. The Global Times has learned that during the year of 2019, the WRC kept pressuring the legal representative of the Hotan company and issued "assessment" to accuse the company of "forced labor" and "violations of human rights," claiming the local government in Xinjiang was involved. The WRC also pressured Badger to end cooperation with companies owned by the legal representative and threatened to work with Western media to continue to play up the issue.

Despite Badger and the Hotan company's continued communications with the WRC in regard to the third-party investigation result, the WRC insisted in working with the Human Rights Watch and other NGOs to pressure Badger not to source from the Hotan company. 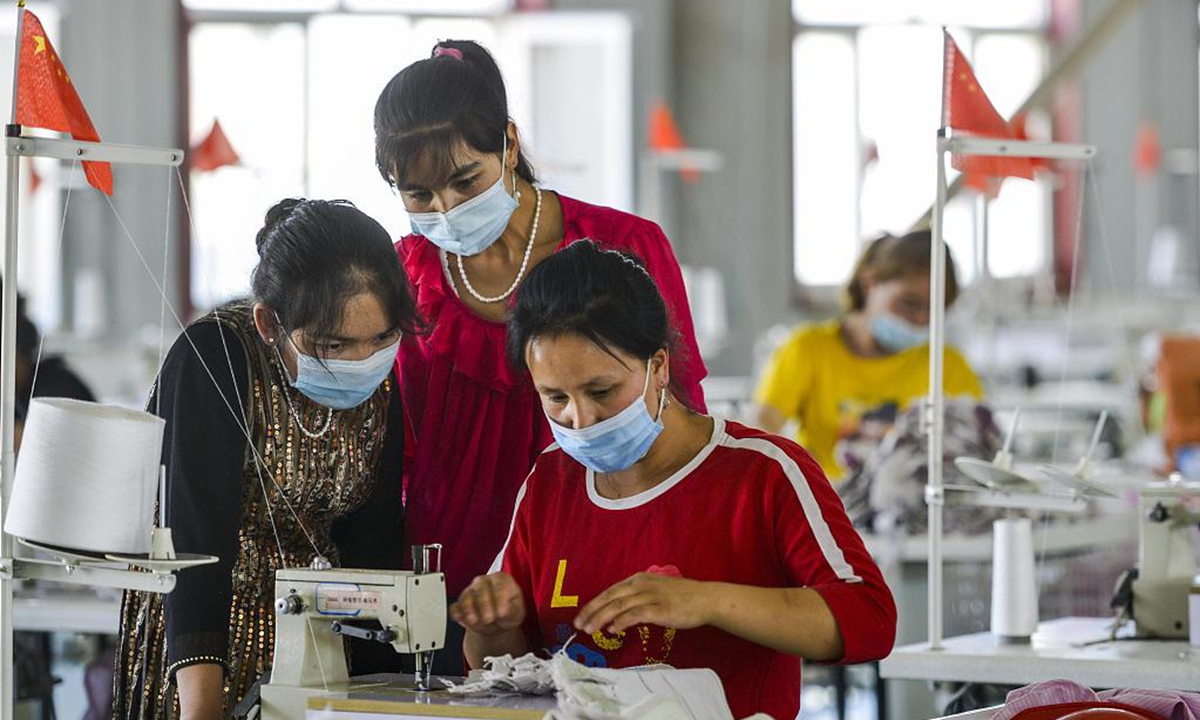 Why is WRC insisting in doing so? Its final purpose was unveiled - asking for $600,000 from Badger as "charitable donation." After several negotiations with WRC's Scott Nova, the final figure was set at $300,000. In order to maintain business and reduce losses, the Zhejiang company, which the Hotan company is affiliated to, agreed to split the fees with badger, the Global Times has learned.

According to documentation acquired by the Global Times, Badger agreed to make three contributions of $100,000 to human rights organizations "designated by Human Rights Watch (HRW)," with the first payment excepted to be made in November 2019. The document said that after Badger makes the first payment, it would deduct $6,250 on a monthly basis from the Zhejiang company open invoices over 24 months, totaling $150,000.

The Global Times also learned that the WRC used similar tactics to force an apparel company in Bangladesh to pay for "charitable fees."

According to a report released on WRC's website, although Badger reaffirmed there is no forced labor being used, it agreed with the "necessary remediate measures offered by the WRC, including the $300,000. According to minutes from an October 25, 2019 WRC meeting published on WRC's website, the WRC director of strategic research Penelope Kyritsis and executive director Scott Nova gave Human Rights Watch the responsibility for identifying Uygur exile groups to receive the Badger money.

The HRW, an organization founded during the Cold War, has been found actively engaged in an anti-China campaign focusing on fabricating baseless rumors related to the Hong Kong Special Administrative Region (HKSAR) and the Xinjiang region.

In the end, where did the money finally go? The US independent website The Grayzone unveiled in a report in April that when asked by The Grayzone which "independent human rights organizations" received the payout by Badger, the WRC's Kyritsis fumbled for an answer. "Um, there was one group in Kazakhstan," she said, but claimed she could not recall its name."

"There is no so-called forced labor in China's Xinjiang. The WRC has no legal right to supervise companies. By hyping evidence-free allegations, it continues to harass companies and force them to make 'donations.' This is blackmail,"Li Wei, a research fellow at the China Institute of Contemporary International Relations and an expert on counter-terrorism, told the Global Times.

Li noted that using ridiculous excuses to deny access to Xinjiang, the WRC sent money to anti-China NGOs and a "Uygur exile" organization, including the World Uyghur Congress (WUC), which has been supporting terrorism.

WUC is a terror organization that stands behind many terror attacks in China's Xinjiang region. It came from the World Uyghur Youth Congress (WUYC), which has been listed as a terror organization in China. WUC's current leader, Dolkun Isa, is also a member of the WUYC. There is also evidence of WUC's former leader and separatist Rebiya Kadeer's talking over the phone with terrorists who led attacks in Urumqi on July 5, 2009, said Li.

The expert noted that one of the biggest problems for global counter-terrorism work is that "the more we fight, the more terrorism spreads," and one reason is some countries adopt double standards on counter-terrorism.

"Under the excuse of human rights and charity, some NGOs also played a shameful role in blocking global counter-terrorism work. Instead of supervising these NGOs, the US and some Western countries are conniving at their illegal activities and using them to attack countries they dislike," Li said.

Li said he was surprised to see NGOs blatantly blackmailing companies, which they used to do secretly. "This may be done together with the US' efforts to hype Xinjiang-related topics to pressure China. Under this circumstance, more NGOs may follow. China's national security department needs to take measures," said Li.